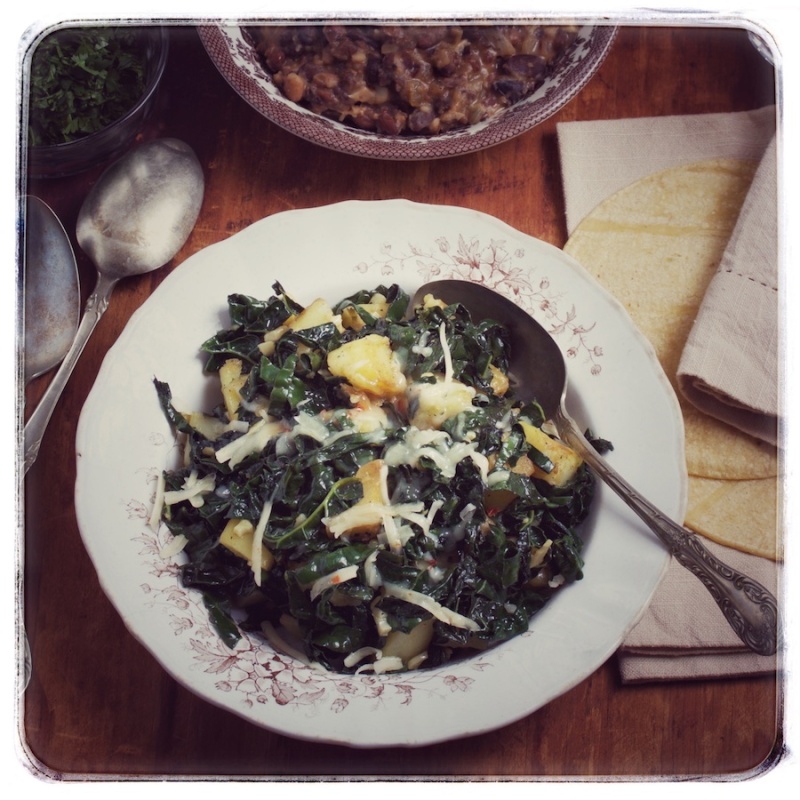 The principal duelists: simple roast pork carnitas and a pan of sautéed kale and potatoes (both by way of Rick Bayless), a bag of corn tortillas and a ball of pizza dough. Seconds: tomatillo salsa, basic white sauce and some grated habanero Monterey Jack cheese. Winners? Michelle and Steve. 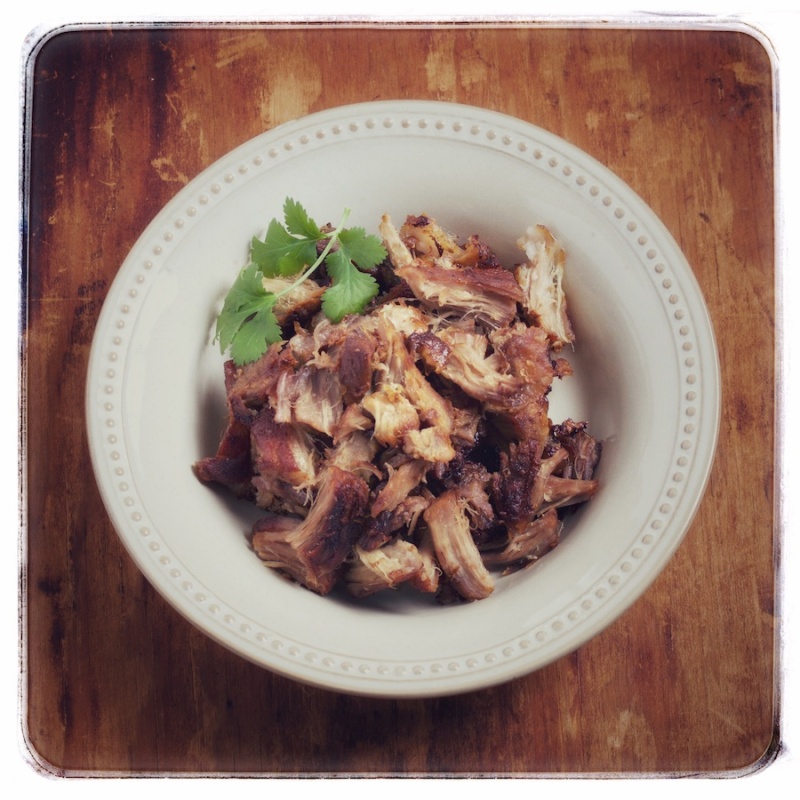 We started with the idea of carnitas tacos, as Steve had bought a piece of locally-raised pork shoulder that was a bit too gnarly to simply roast. As potatoes and kale are some of our main winter staples, we of course had them around as well, so Michelle thought that combination would make a nice pairing with the carnitas. 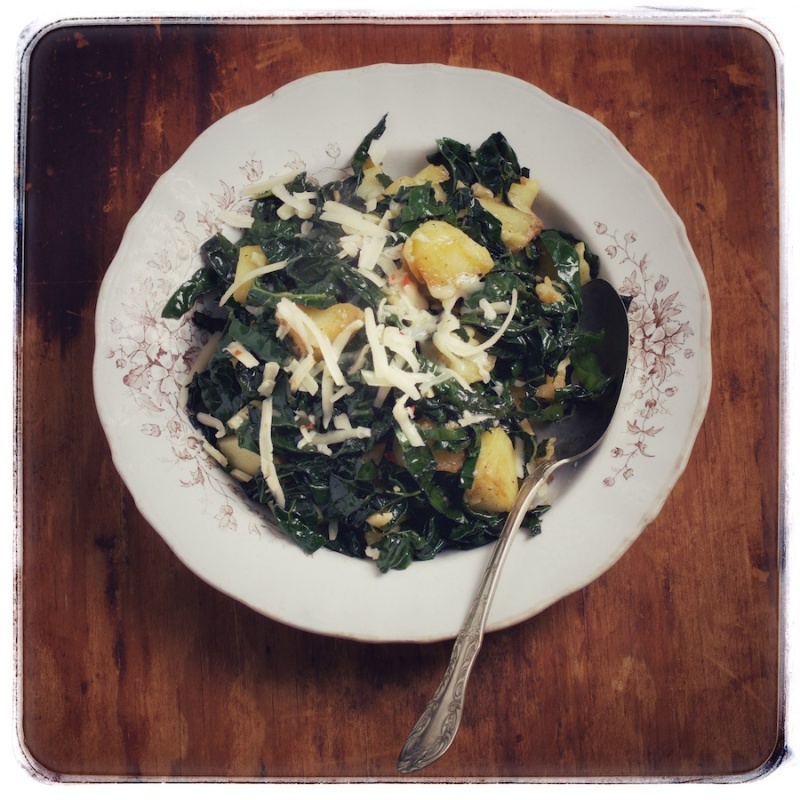 Though delicious, the portions we created were quite large, leaving us with the slightly boring prospect of having tacos two nights in a row. Entering a typical Gourmandistan after-dinner discussion (“Now that we’re finished eating, what are we having for dinner tomorrow night?”), Steve noted the pizza dough ball sitting in the freezer, and Michelle decided we’d see what carnitas, kale and potato pizza tasted like. 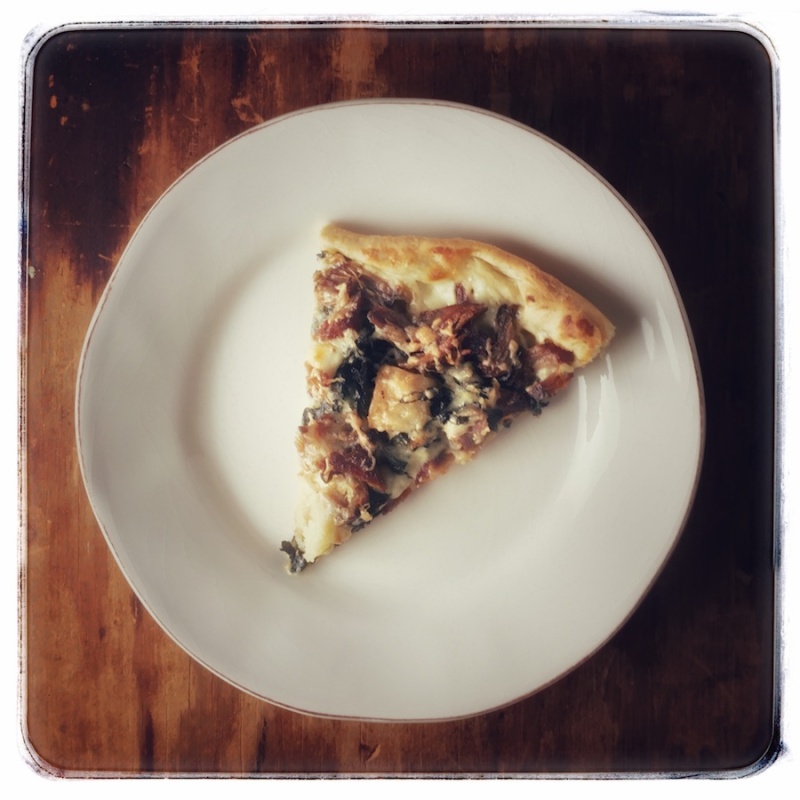 Steve floated the idea of using leftover tomatillo salsa as a sauce base, but Michelle thought the condiment would separate in the heat, and decided a white sauce might do the trick. We layered on the leftover taco ingredients, sprinkling the meat and veg with Monterey Jack instead of mozzarella. Unsurprisingly, we loved it—because really, it takes a lot to make a bad pizza. 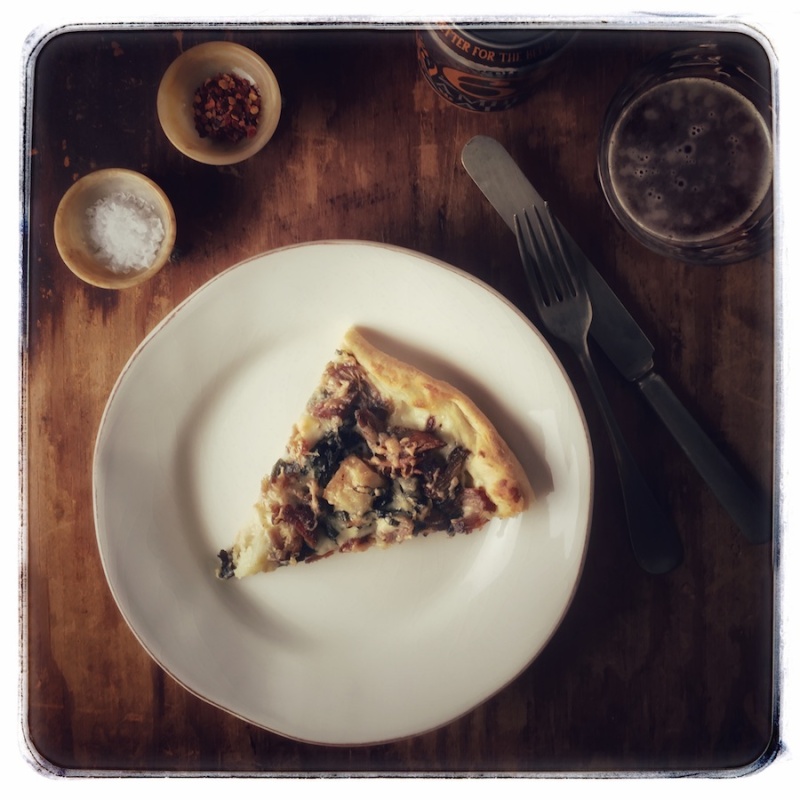 While we can’t predict our recent bout between tacos and pizza will become as big as the feud between Taylor vs. Nikki, we’d like to think the Internet will enjoy this battle. No matter which side one picks, it’s sure to be quite tasty.

Boil potato pieces in water for a few minutes until just starting to soften. Drain.

Cook potatoes in a generous amount of olive oil in a skillet. When lightly browned on all sides, mash them a bit with a fork or potato masher. Add a little more olive oil if needed along with garlic. Toss until garlic softens. Add kale, salt pepper and pepper flakes and toss until kale has softened. Add some broth or water if it seems too dry. When kale is done, splash on some sherry vinegar. Top with a bit of cheese

Serve in tortillas with additional cheese.

Leftovers can be used on a pizza. Start with this crust. Slather on white sauce (without the rosemary). Top with leftover carnitas, kale/potato mixture and some pepper Jack cheese.