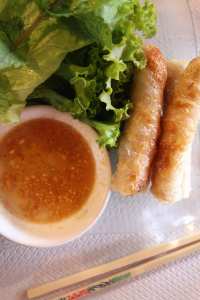 Many people have expressed astonishment that, even in France, we often enjoy Asian meals. “But you’re in France!,” people exclaim. “Shouldn’t you be enjoying French food?” We have two somewhat inter-related answers. First, even for Gourmandistanis, there can be such a thing as too much foie gras.  Second, in many ways, Asian food in France is still very, very French.

France was a colonial power in much of Southeast Asia for much of the 19th and 20th centuries, until leaving the task to an ill-suited U.S. presence in the 1960s. Besides setting the table for a clear demonstration of American military misunderstanding, the real accomplishment of French Indochina was the virtual creation of haute Vietnamese cuisine, from luscious bánh mì (Vietnamese-style sandwiches on sliced baguette) to delicate spring rolls. Now, in France, virtually every Asian restaurant claims “Vietnamese” as part of its specialty, and even if they don’t, they’ll usually have that Gourmandistan favorite, nems.

Nems are a lighter, tastier version of egg rolls, made with rice paper skins stuffed with pork or crab, clear noodles and mushrooms. In a set-price menu offering of entrée/plat/dessert, one diner will often receive five or six nems as a starter—which seems a lot until you realize how tasty they are. Nems are usually served with nuoc cham (a dipping sauce which is a mixture of sweetened, watered fish sauce, lime juice, garlic and chiles) and curly lettuce and mint leaves for wrapping. We have often seen nems for sale at French markets, but only one enterprising Asian in Normandy ever served them ready-to-eat.

As mentioned, nems are often part of a set-price 3-course menu, a big difference we’ve found between French and American Asian establishments (although the odious idea of the all-you-can-eat buffet does seem to be creeping into France, unfortunately). It’s an interesting accommodation to French dining habits, complete with the expectation of an apéritif before, wine during and espresso at the end of a meal. But the biggest difference seems to be the ingredients. While in America low prices often mean low quality, we have rarely encountered “mystery meat” or cornstarch-thickened soups in France. In fact, the source of the meat is usually prominently displayed somewhere in the restaurant.  So whether it’s “La Perle d’Asie,” “Saigon” or “Indochine,” Asian restaurants are a welcome addition to Gourmandistan’s French food intake.