Possibly the saddest lie Michelle has ever told involves a pony, the Pyrenées and picture-taking. Steve had asked to stop on a narrow, guardrail-less road winding its way towards St.-Jean-Pied-de-Port so he could photograph a Basque pony, one of a small herd climbing the steep mountainside.

Michelle, a raging acrophobic, suffered Steve only a few shots before declaring she was worried he would “fill up the card” on the digital camera. Steve, who has much experience with Michelle’s fear of heights expressing itself in novel ways (e.g., oddly overwhelming concern for a hypothetically falling baby) gently acceded to this fiction and returned to the car, managing to take a few other photos of the gorgeous mountainscapes and the creatures that live among them between Michelle’s bouts of crippling fear.

It turned out that, other than the altitude, Michelle very much enjoyed the Basque country, an odd, defiantly un-assimilated land of espadrilles, frontons and a glorious tradition of pintxo bars. Once she pried her clenched fingers from our car’s steering wheel, she managed to take some nice pictures as well. 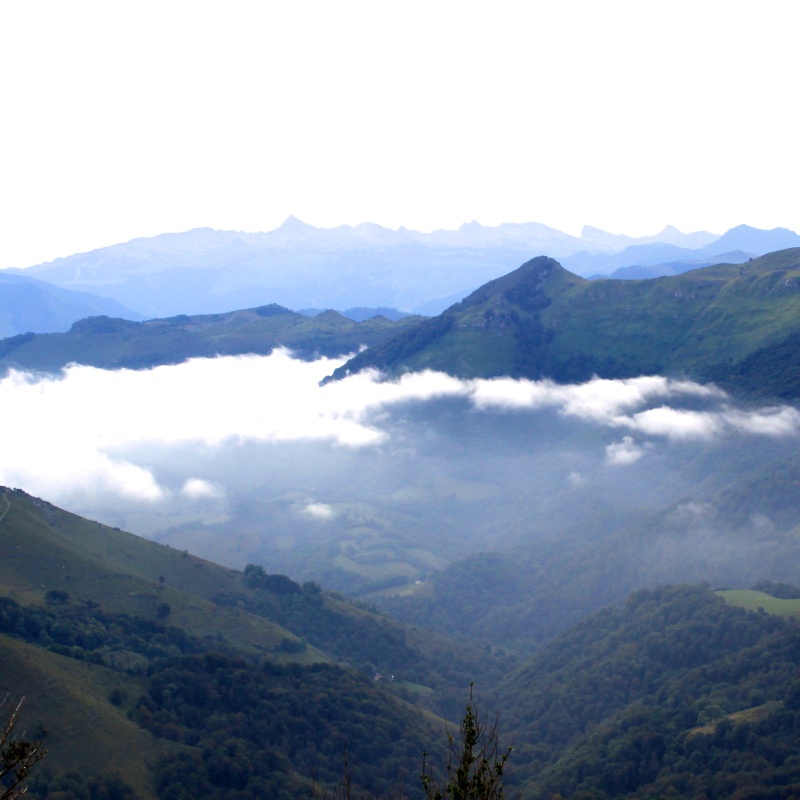 And based on that, we made this deliciously garlicky-spicy soup based on a Basque recipe, which let us once again reminisce about our time between France and Spain—helped, Michelle must admit, by Steve’s “camera-stuffing” shots.

It’s like breakfast in a bowl: sausage, egg and toast!

(adapted from Lois Anne Rothert’s The Soups of France)

Heat the olive oil in a soup pot over low heat. Add the garlic, sausage and bell peppers, stirring often until the sausage is broken up and browned, about 10 minutes. Drain any excess fat from the pot, add the pinch of Piment d’Espelette or other pepper, salt and stock, then bring to a boil over high heat. Reduce heat to low and simmer, uncovered, for about 20 more minutes, until the garlic and red pepper ribbons are soft and tender. Taste, add more seasoning if desired, then ladle into bowls or soup plates. Garnish each bowl with a poached egg, some croûtes and a dash of vinegar.

Preheat oven to 375° F. Spread narrow slices of French, whole grain, white or other bread on both sides with a thin layer of butter, lard or other fat. Place the slices on a baking sheet and put them in the oven for 5 minutes. Check the bottoms for brownness, leaving them in for a few more minutes if needed to get them golden brown. Turn the bread slices and bake for another 3 to 5 minutes until both sides are golden brown. Remove from the oven and cool the croûtes on a rack.