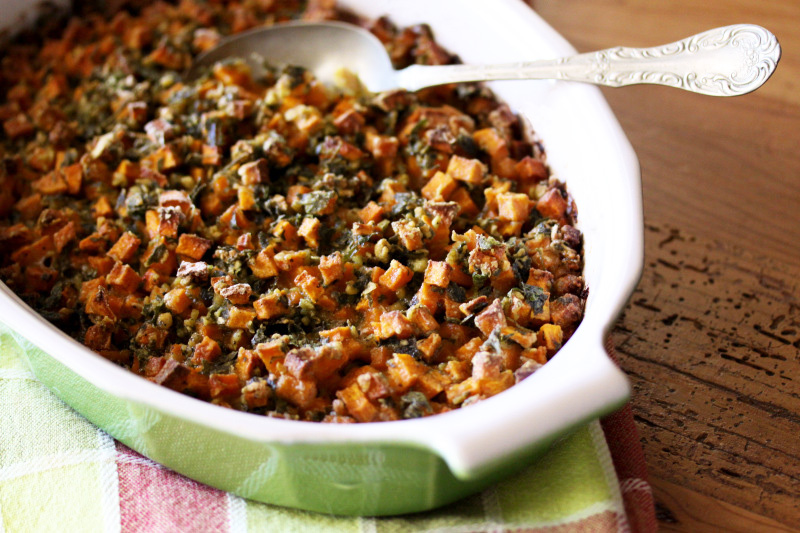 Winter squash is work. Peeling is a chore and cutting can be terrifying, as the heavy flesh resists even the sharpest knives. And many times our local squash can be a little disappointing, our butternuts and acorns lacking a certain sugariness that we’ve found in French potimarron and Italian zucca. Michelle spends much time at local markets searching for something that appears close to these champions of cucurbitae. And when she finds a suitable candidate she faces even more work, as this Richard Olney recipe requires much cutting into tiny cubes to get the half custard/half crunchy texture that makes this dish so worth the effort.

Work hard, eat better. That’s how we roll in Gourmandistan.

Cut the squash into tiny cubes (1/4” to 1/3”).  Toss in a mixing bowl with the garlic and parsley.  Season with salt and pepper.  Sprinkle flour over and toss until each tiny cube is evenly coated.

Generously rub the bottom and sides of a gratin dish with olive oil and then add squash mixture.  Press the squash down.  Drizzle with olive oil.  Cook in a slow (325 to 350° F) oven for 2 to 2-1/2 hours, until the surface forms a deep brown crust — just short of being blackened.  As the original recipe says:  “Beneath the crust the squash should have melted to a near purée, the cubes retaining perfectly their form but ready to collapse at the touch of a fork or a tongue.”

It’s a lovely day to visit our antique car, which we are slowly returning to its natural state. #volkswagenbeetle
We’re all clear and ready for the new year. Thanks for the ability to hydrate when we need it, OCWD!
Luckily it’s a night we have many incentives to drink something else. Happy New Year everyone—remember to cherish your resources!
Good night, Madisonville. #kentucky
Hope your holiday is much less miserable than this poor fellow’s. #xmas #hannukah #holiday #catsofinstagram
Much prettier when you don’t have to drive through it. #creek #ice #bridge
%d bloggers like this: