About five minutes after his favorite fruit farmer, Sandi Deutsch, made a facebook post about picking sour cherries, Steve called and demanded her entire haul. The next afternoon we faced an all-to-perishable pile of crimson, scarlet and neon red cherries, perhaps six pounds in total, that needed to be dealt with quickly. We also knew it would likely be our only chance at local cherries in 2012. Tiny sour cherries, also known as “pie cherries,” have a very brief appearance at our markets, if we see them at all. They don’t travel well, it seems, and their season is very short—so we wanted to make the most out of this year’s bulk purchase. 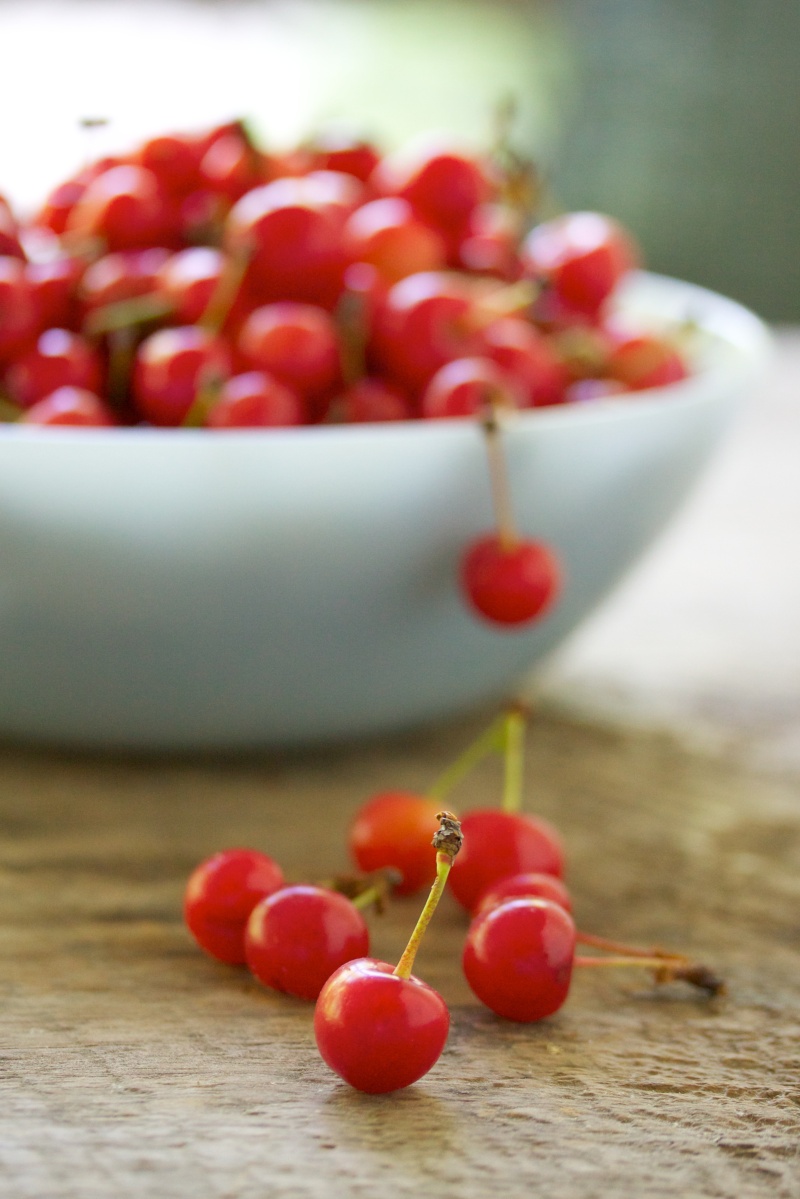 We started by pitting a couple of pounds, sitting side by side at our kitchen table with a couple of bowls between us. As Michelle wielded a knife or simply ripped the tender flesh asunder (we own only one cherry pitter), Steve plunged his pitting stake through fruit after fruit, until our kitchen (and especially Michelle’s shirt) looked like a serial killer had decided to stop by for dinner. Michelle used the mutilated cherry corpses for jam, but just like two years ago the little buggers had their revenge—though full of good cherry flavor, the jam turned out too thick and Jell0-ish for Michelle’s taste.

While not a total loss (Steve will valiantly suffer a slightly-chunkier-than-usual bowl of morning yogurt for several weeks), Michelle set her eyes on a new challenge: a lattice crust cherry pie. Once again she waded into the cherries, using the pitter this time with grim determination until she had her pie plate of cherry meat, and shaped out a couple of buttery crust rounds. Letting Steve sleep off a tiring Saturday morning chicken coop cleaning, Michelle patiently cut strips of dough and braided them on top of her cherry mixture. Steve woke to the sweet smells of sour cherry pie, which turned out to be one of the best he’s ever eaten.

The sturdy crust not only looked wonderful, but caged in the sweet and sour cherry filling so that a slice could be lifted and shoved into one’s mouth almost whole. (Not that Steve would ever do such a thing. Not when you were looking, anyway.)

We pickled the remaining cherries in an Asian brine, and look forward to seeing how they’ll taste paired with pork or perhaps a rye whisky drink. 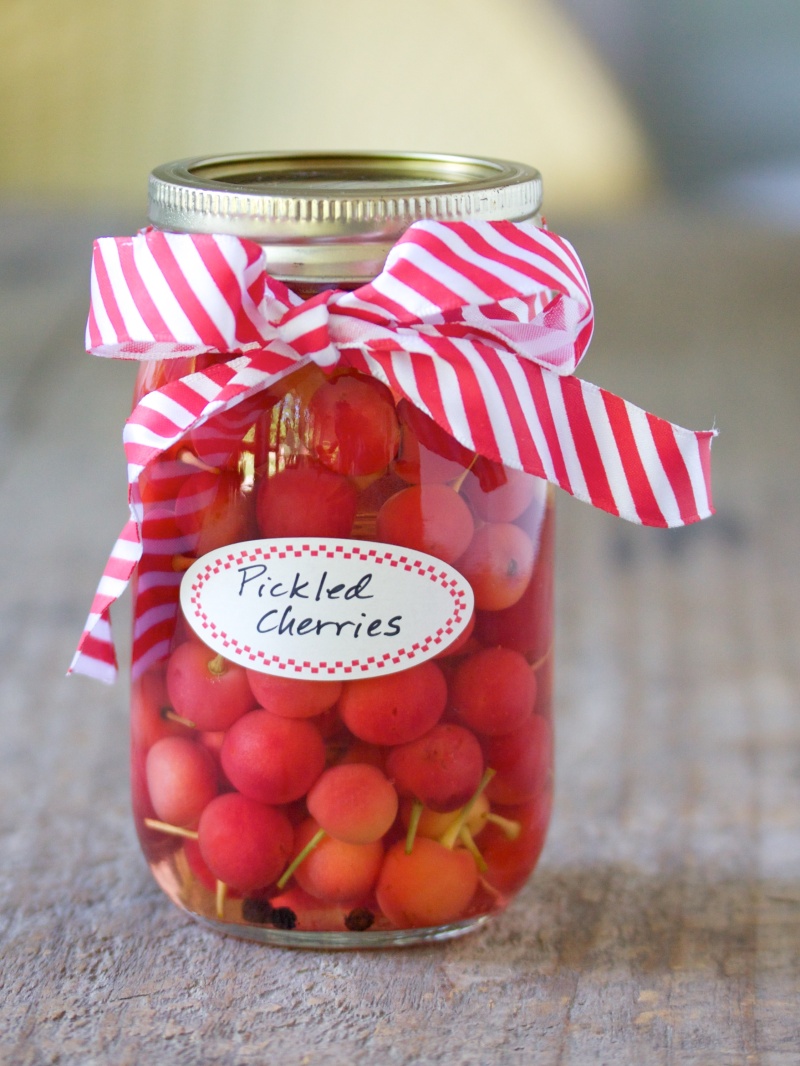 But what we’ll really look forward to is next year, when cherry season will once again briefly be upon us.

Combine flour and salt in bowl of food processor. Add shortening and pulse until incorporated.  Add butter cubes. Using short pulses, incorporate into flour mixture until the butter is reduced to pea-sized pieces. Sprinkle about 5 TB of the water over and pulse to incorporate.  If needed, add some or all of remaining 2 TB of water and pulse further.  The dough should be crumbly and somewhat dry.

Divide dough in half.  Press each half into a disk and wrap in wax paper.  Refrigerate for at least 30 minutes.

Roll out one piece of dough to an approximately 13″ circle on a clean piece of wax paper dusted with a small amount of flour.  Place crust in a 9″ (preferably glass or ceramic) pie plate, with a 3/4″ overhang. Brush off excess flour with a dry pastry brush.   Place in refrigerator.

Place a pizza stone wrapped in aluminum foil on a lower rack of the oven.  Preheat oven to 400°.

Mix cherries, sugar, tapioca and kirsch together in a bowl.  Let stand for about 30 minutes, tossing occasionally.

Add filling to the pie shell.

Arrange half of the dough strips on the top of the pie, about 1/2″ apart.  Weave the remaining strips criss-crossed over the others.  Fold the bottom crust over the ends of the lattice strips, and pinch.

Brush cream on the top crusts, then sprinkle sugar over.  Dot the fruit in between the lattice with small pieces of butter.

Bake atop the pizza stone until top crust is browned and the fruit is bubbling.  The original recipe said it would take 45 minutes.  It took 55-60 minutes for us, using a heavy Emile Henry ceramic pie dish.  Watch crust closely and if rim is getting too brown, cover the edges with foil.  Remove from oven and cool on a wire rack.