Michelle wanted to make a dessert. Perhaps a peach crisp with the few shriveling fruits left in our crisper, maybe a Normandy-nearing tart with some of the funky-looking apples Steve picked up on Saturday’s market run. Our weekly trip was shorter than usual, and she felt the entire day was ahead of her. Then she decided to make this Roasted Corn Chowder with Garlic and Herb Butter from David Tanis’ Corn, part of the “Country Garden Cookbook” series. She’d made this recipe before, writing “good” and “add garlic” and a few other notations alongside the call for bell peppers, potatoes, corn and several other things. Oddly, there was no indication that the recipe would take hours of uninterrupted prep. 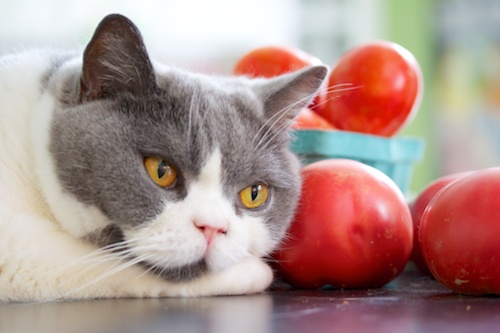 Jeeves, “helping” with the kitchen prep.

Of course it is quite likely that preparation time would have been much shorter if Michelle hadn’t decided to make her own vegetable stock, including the fresh corn cobs along with a freezer bag of frozen veg bits we hold back for stock-making occasions. And for some reason the compound butter didn’t cooperate, taking longer than usual. Plus, a layer of even-worse-than-usual August heat combined with near 100% humidity called for frequent stops in our kitchen, always the hottest room in the house. Steve popped in occasionally, husking corn, peeling potatoes, straining the stock and suggesting Michelle make a dish of crackling cornbread to go with the chowder. Mostly, he stuck to playing video games and watching the Olympics in a cooler room while Michelle filled first the dishwasher and then our largest sink with pots, pans, dishes and other detritus.

Eventually, dinner was served, and we enjoyed a lovely meal made from an array of ultra-local ingredients, making a decent dent in our farm share stores. After all that effort, though, there was sadly no dessert. Steve, however, did clean the kitchen and pantry today in penance, a slightly sweet ending that will have to do.

Make compound butter:  Mash ingredients together in a bowl with a wooden spoon.  Drain off whatever lime juice fails to incorporate. Scrape the butter mixture onto a piece of wax paper or plastic wrap.  Form into a cylinder about 1-1/2″ in diameter.  Refrigerate.

Toss corn kernels with some olive oil.  Place in a pie pan or other flat pan.  Roast under the broiler, tossing occasionally, for about 10 minutes until browned in places.  Set aside.

In a soup pot, caramelize onion in some olive oil, stirring occasionally.  Add peppers, thyme, bay leaf and garlic.  Cook for a few minutes, stirring.  Add potatoes and stock.  Bring to a boil.  Boil for a couple of minutes, then reduce heat.  Simmer gently for about 10 minutes.  Add 3/4 of the cooked corn kernels.  Simmer for another 10 minutes or so until potatoes are tender.

While soup is simmering, purée remaining 1/4 of corn kernels in a blender with a bit of the stock.  Add to soup.

Serve soup in wide bowls.  Float a slice of compound butter on each serving.