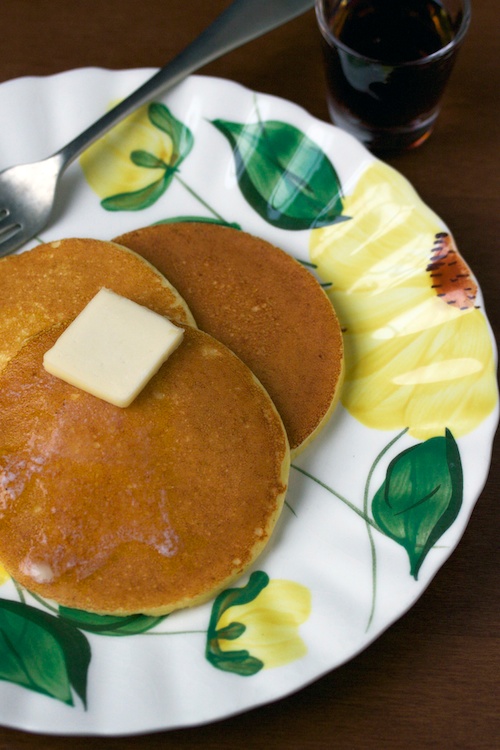 Gourmandistan is not normally a territory enthused about the prospect of kidneys. Even a fan such as Jaques Pépin is forced to describe their flavor as “an assertive taste that some may not find inviting.” Putting it bluntly, kidneys pretty much always taste of urine, quite possibly because their primary function is producing the stuff. While we’ve received them in several whole animal purchases, we’ve usually (somewhat secretly and shamefully as nose-to-tail enthusiasts) allowed them to go to waste. Today, however, we’re here to argue quite the opposite position on kidneys. Just not in a culinary way. That’s what the pancakes are for—along with celebrating the start of a new status for Michelle’s father as a transplant recipient.

Tom was on dialysis for several years—a time-sucking, location-limiting lifestyle adjustment the entire family had begun to accept as our normal way of life. Weekend before last, however, he received what the doctors called “a perfect match,” donated by the family of a girl who died far too young at the opposite end of the country. The procedure took the better part of what became a blurry, sleepless night, with Michelle and her mother stumbling home around 6:30 on Sunday morning to report a successful surgery before collapsing in happy exhaustion.

Steve needed a way to feed three ladies with different sleep schedules and asked Michelle’s sister for suggestions. The reply was “pancakes,” a food not seen in Gourmandistan for many years. Steve’s first sleep-deprived stab at finding a recipe was Edna Lewis, but waiting 8-10 hours for sourdough to ferment was out of the question. Turning to the “breakfast” shelf of Gourmandistan’s cookbook library, Steve’s tired eyes fell on Morning Food: From Café Beaujolais, possibly because its bright yellow dust jacket penetrated his gummy eyelids. “Cottage Cheese Pancakes” seemed simple enough, except Gourmandistan at the moment possessed no cottage cheese. Substituting a dab of almost-out-of date ricotta and some Greek yogurt seemed to do the trick, as Michelle’s sister pronounced the thin, tasty, almost crêpe-like cakes extremely satisfying. A few hours later Michelle’s mom awoke and, after a small plateful, agreed—noting that she often made the same recipe at home with the called-for cottage cheese.

In the days since, we’ve treated the entire newly-kidneyed clan to several other pancake breakfasts, once using all ricotta and another time using all yogurt. All versions were equally good, perhaps made even tastier seasoned with the anticipation of life after dialysis.

We may not care for the flavor of lamb or beef kidneys, but we surely hope to enjoy this one—and the idea that someday we might provide such a gift for another family. Because someone cared enough to be generous even in a time of grief, we can share this happy story and simple, family-synchronous recipe with you. And we urge you, if you have not done so already, to become an organ donor.

Place all ingredients in a blender.  Combine on low speed until smooth and all flour is incorporated.

Pour batter in 1/4 cup increments onto a nonstick or lightly buttered hot skillet. Turn when bottoms of pancakes are browned.

Serve on a warmed plate with butter and/or maple syrup.