Every Fall for nearly a decade, when the apples are in season, Michelle returns to the hunt for perfecting the Caramelized Apple Cake in Susan Herrmann Loomis’ Cooking at Home on Rue Tatin. It has become her obsession. Loomis describes the cake as “dense and buttery with a pure flavor.” Michelle would possibly describe it as “all that most maddens and torments; all that stirs up the lees of things; all truth with malice in it; all that cracks the sinews and cakes the brain; all the subtle demonisms of life and thought”—because no matter how she tries, the damned thing is delicious but doesn’t turn out just right. 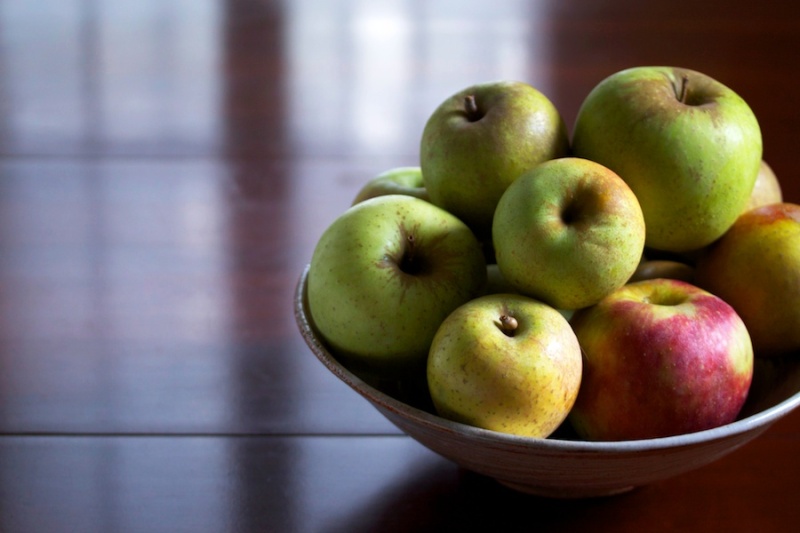 Michelle has sliced the apples more thinly, and tried different varieties. Added ingredients in different sequences. Made extra caramel. Baked it for varying times. Nothing ever really works. She’s come close on several occasions and will think she’s cracked it. Then, the next time, made the identical way, it will wind up undercooked in the middle or half the apples will stick to the bottom of the pan. So, at least for this year, Michelle has given up on the Caramelized Apple Cake. 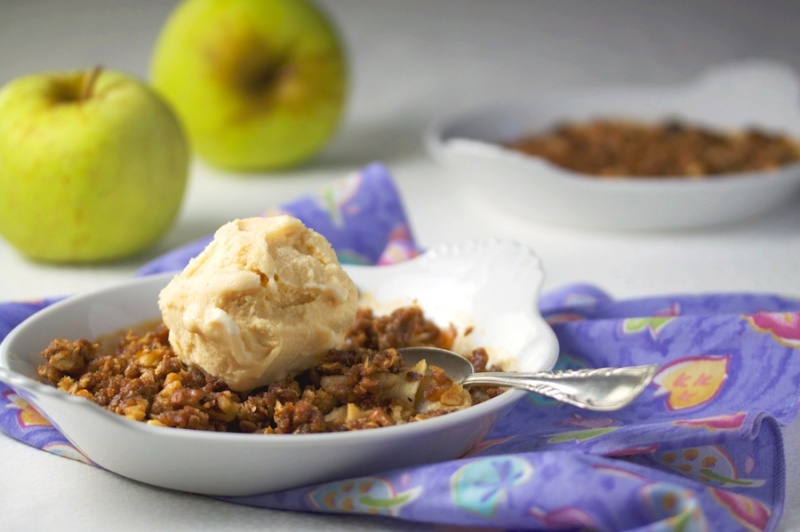 We present instead a perfectly delicious Apple Crisp, a simple dish with a little flair from crystallized ginger and dried sour cherries. We found the recipe on Epicurious, from the November 1998 edition of Bon Appétit. We like it with a mix of our local Golden Delicious apples (which have a sweet taste and soft texture that cooks down nicely) and Stayman Winesaps (which have a spicy taste and hold their shape a little more). The dish takes only a bit longer than a run-of-the-mill crumble or crisp, and it turns out tasty every time. It’s a safe harbor for sweetness.

But the cake is still out there. Michelle’s quest will most likely go on. Hopefully it will lead to another blog post, instead of the wreck of the Pequod.

RECIPE NOTES:  We don’t much care for cinnamon, so left that out. We used walnuts instead of almonds in the topping. And, unless absolutely necessary (which it isn’t in the case of apples), we don’t like thickeners in our fruit desserts, so omitted the flour in the filling. Otherwise, we’ve followed the recipe, though only 1/3 of it. It works equally well in a single casserole dish or in 4 one-cup-capacity pie dishes. Oh, and is it even better with salted caramel gelato on top? Yes. It is.