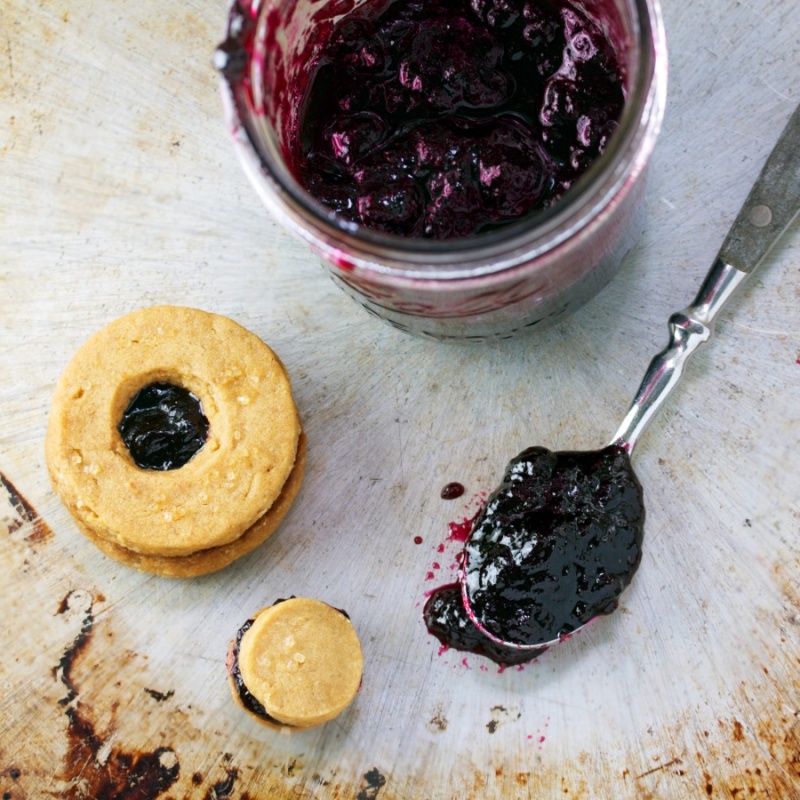 Along with its partners, peanut butter and sliced white bread, Concord grape jelly is an American staple, a symbol of something completely familiar and unsurprising. Which is why Steve was so delighted to find out that the original name for it was “Grapelade,” and the stuff became popular after it was included (along with cigarettes) in WWI ration kits.

According to the Concord Grape Association (whose members “process more than 90% of the Concord grapes processed annually in the United States”), Concord grapes did not come into being until the 1850s, when Ephraim Wales Bull developed the strain on his farm outside Concord, Massachusetts (“down the road from the Emerson, Thoreau, Hawthorne and Alcott homesteads”). Several years after the Concord became popular, a New Jersey dentist named Dr. Thomas Welch created “the world’s first processed fresh fruit juice” for use in communion services for Methodists and other abstemious Christian sects. (As a lifelong apostate Steve frowns on this practice, as he believes anyone who has to sit through the entire process of transubstantiation deserves at least a little drink at the end.) When the first World War arrived, the Welch Grape Juice Company came up with the idea of cooking their grape juice down into a more solid, spreadable substance. They convinced the US government to include it in soldier rations, and after the war began to market the stuff, calling it “Grapelade.” (According to the US Patent Office, other Welch’s products in the early 1920s were to be called “Peachlade” and “Welch-Apl.”) The Internet still turns up references to this name as recently as the 1950s before Welch’s decided their name was their brand, and “Grapelade” became known as “grape jelly.”

As the Grapelade moniker was falling into obsolescence, grape jelly joined with peanut butter and white bread to become an iconic symbol of America. (Some say this began in World War II, when peanut butter, jelly and bread were provided to soldiers as part of their ration kits. See kids? Wars are awesome!) As Americans became inured to the wonders of PB&J on white bread, they began to explore other ways of eating these things together—and Gourmandistan is no exception. 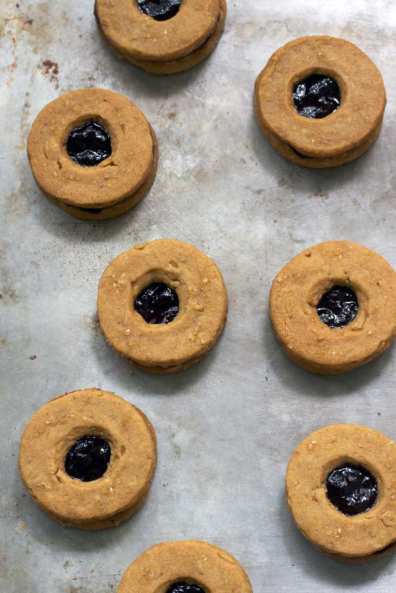 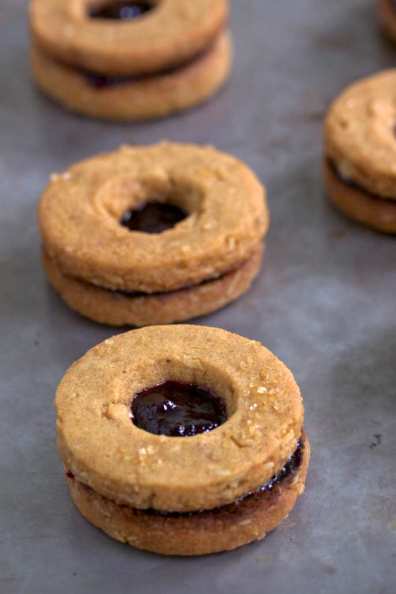 In late summer, Michelle had made a batch of jelly from some Concord grapes Steve bought at our market, enjoying the flavor so much she decided it needed something special to feature it in. Combining bits and pieces of different recipes on Martha Stewart’s website, Michelle produced these splendid peanut butter cookies with Concord jelly, a fitting platform for the marvelously aromatic grape jam.

Steve enjoyed them almost as much as he enjoys saying “Grapelade,” as did Michelle—though she did convince Steve to make some fluffy white bread, as she also plans to enjoy the iconic version of a peanut butter and jelly sandwich very soon.

Combine grapes and lemon juice in a medium nonreactive saucepan. Cook over high heat, stirring frequently, for about 7 minutes, until grapes release their juices. Strain through a fine sieve (there should be about 2 cups of juice).

Preheat oven to 350° F. Position rack in center of oven.

Place a sheet of waxed paper on the counter. Melt 4 tablespoons of butter in a medium saucepan. Add oatmeal and cook over medium heat, stirring, until toasted, about 5 minutes. Spread oat mixture onto parchment and let cool.

Toss together flour, baking soda and salt in a small bowl.

Cream remaining stick (8 tablespoons) of butter and sugars in the bowl of an electric mixer with paddle attachment. Add peanut butter and mix until combined. Add flour mixture and toasted oats. Mix on low speed until combined.

Remove the whole cookies from the freezer and bake in the middle of the oven for about 10-11 minutes, until golden, rotating in the middle of baking. Let cool completely on the baking sheet, then place on a cooling rack.

Remove the donut-shaped cookies from the freezer and sprinkle with a bit of Turbinado sugar. Bake in middle of oven for 9-10 minutes. Let cool.

While large cookies are baking, place the 1″ circles removed from cookies on a third cookie sheet and refrigerate. Reroll the scraps as previously between sheets of waxed paper. Refrigerate until chilled. Then cut out as many more 1″ circles as you can, adding to those on the cookie sheet that has been chilling.  Sprinkle half of the tiny cookies with Turbinado sugar.

Bake the tiny cookies for 6-7 minutes and cool, as above.

Make sandwiches by spreading a bit of jam on the bottom sides of the unsugared cookies. Top with the sugared halves.

Whatever cookies aren’t eaten the first day should be frozen, as the jelly makes them go soft quickly.