A period of unfortunately-timed icy weather last week saw Gourmandistan once again facing an empty heating fuel tank, forcing us to lower our thermostat to a fairly chilly 50° F, to take short showers and to avoid using our gas cooktop. (Steve has already set reminders to check the tank level more frequently next winter.) Thanks to a pan of lasagna made before we knew the house was running on fumes, we did not suffer too greatly. An “emergency” request to our propane supplier somehow took over two days to answer, but Gourmandistan finally has heat, a flame-ready cooktop and hopefully enough fuel to last until spring. For some reason (possibly that, though no longer icy, our weather has been damp and grim), one of our first thoughts was to make more soup.

We bought oxtail on a quick trip to a winter farmers’ market, and discussed stews, cannelloni or crêpes stuffings and other ideas on the way back before settling on Michelle’s direction of “something Asian, possibly with fermented black beans.” We settled on a stew recipe from Patricia Yeo, but when we returned home we realized the tail was tiny, meaning stews or stuffed things would not be an option unless we wanted a lot of trouble for a lilliputian result. As we had also bought some beef bones for stock, Michelle decided she would incorporate Yeo’s seasonings with some other ideas and put together a soup. Fermented black beans, ginger, garlic and orange zest were finely minced, then softened with a bit of onion on top of the crusty bits left from browning the oxtail. Miso and red wine along with a handful of dried shiitake mushrooms were added. Letting these ingredients cook together with the tail made for a very hearty, umami-laden broth, which became even more decadent when bits of shredded oxtail and sliced shiitakes were added back to it. 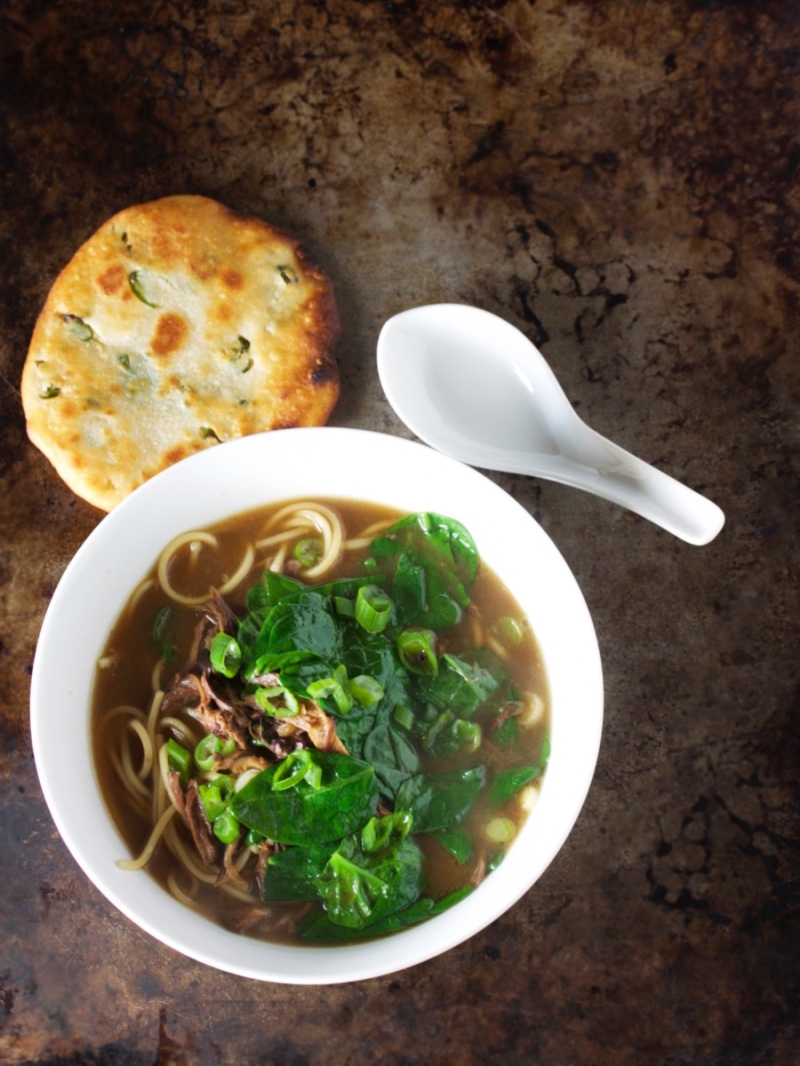 Garnished with scallions and spinach, the soup was satisfyingly meaty and not really all that Asian. But in our well-heated kitchen, with some delicious scallion pancakes, Steve slurped up a big bowl and applauded Michelle’s improvisation. Hopefully next year we won’t run out of fuel. However, we will very likely make this soup again.

Brown oxtails in oil in a soup pot or Dutch oven. Remove to a plate.

Add onions to fat in pot and cook, stirring occasionally.

While onions are cooking, chop black beans, ginger, garlic and orange zest. When onions are colored, add bean mix to the pot. Sauté until garlic is cooked.

Add wine and miso to pot, stirring. When incorporated, add stock, mushrooms and reserved oxtails. Bring to a boil, then reduce heat and simmer for 3 or 4 hours until meat is fully cooked.

With a slotted spoon, remove oxtails and mushrooms and set aside to cool. When cool enough to handle, remove meat from bones and shred. Thinly slice the mushrooms.

Return meat and sliced mushrooms to the broth. Add soy sauce. Reheat. Taste for seasoning (it probably will not need salt, however).

Add spinach to soup and cook just until wilted. Pour soup over noodles. Sprinkle with scallions.