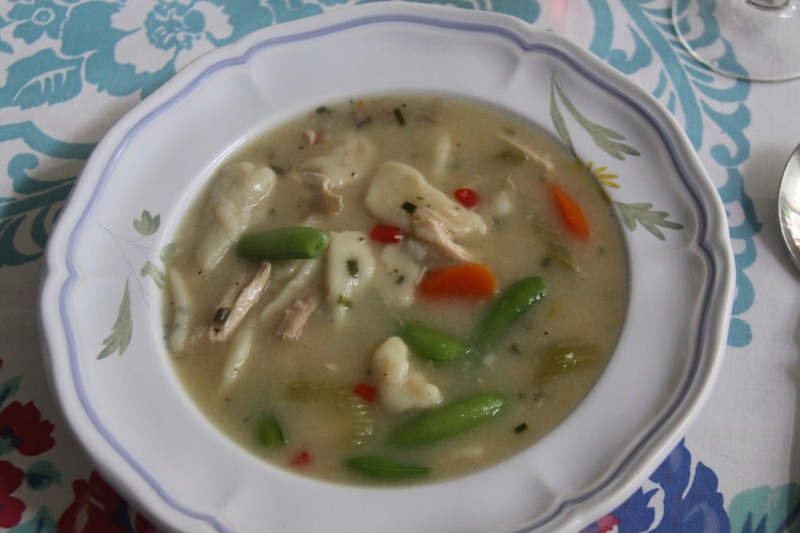 We started with several baby chicks, which grew into heritage French Houdan hens running around the yard with the rest of the flock. Actually, these Houdans spent much of their time running from the rest of the flock, pecked bare-backed and bald by their nasty and brutish coop mates, and by each other. In early Spring Steve tried to reduce the numbers of our flock by letting the chickens roam free, but even the dopey Houdans (complete with tasty-looking patches of bare chicken flesh on display) proved resistant to hawks, owls and coyotes. Once her flower beds were re-mulched, Michelle demanded the hens be confined to their fenced yard—and Steve was forced to take reduction into his own hands. Michelle’s father helped dispatch the Houdans (along with another, ancient, Red Cap hen), and Steve spent Monday morning plucking and cleaning, then putting the birds in brine. Wednesday night, we made stock from the Red Cap.

Because Michelle wanted to treat the Houdans with respect, and “honor” their place at our table, she felt the best way would be to make chicken and dumplings. So on Thursday, starting in the early afternoon, we began to prepare. Steve butchered the carcasses (more in the pejorative sense—though he may be able to behead, pluck and clean on a par with any poor Tyson worker, beautiful cuts of meat are apparently beyond him). Michelle began to prepare the vegetables and cook the meat (a four-hour process), and mix a roux for the next round of cooking.

Steve thought the house smelled heavenly, while Michelle kept on cooking. Friday afternoon, Michelle made dumplings, using chives and parsley from our herb garden outside.

Finally, everything was in the pot together—broth, chicken, vegetables, dumplings. And yes, it was very much worth the effort. That delightful meal was the goal dangling before us at every step, from plunking dumpling dough into a bubbling pot all the way back to plodding out to the coop on a winter morning. And this time, we got to eat it.

THIS RECIPE IS UPDATED HERE.