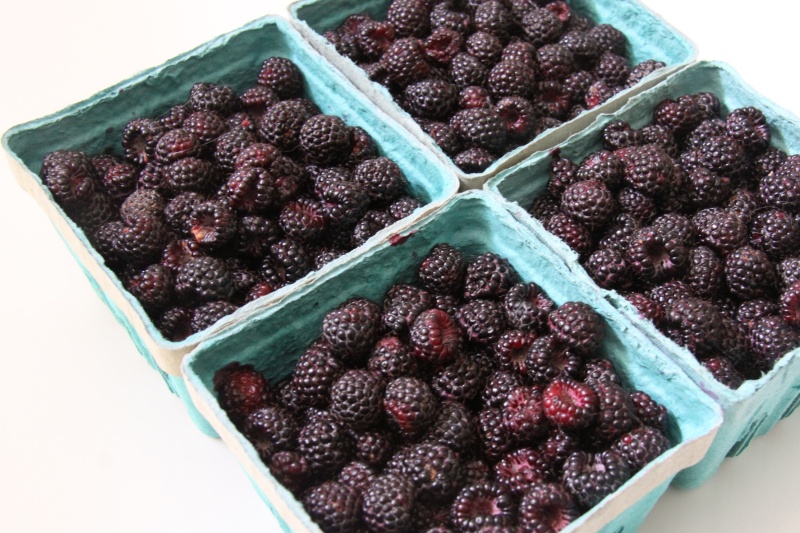 Black raspberries are the RuPaul of brambly drupelets. While they are raspberries, they have the sass and presence of a really good blackberry. The difference? It’s the core. Both blackberries and raspberries are collections of little seed-bearing fruits (called “drupelets”) attached to a central structure. In a blackberry, these drupelets remain attached, so the fruit has a “core.” Raspberry drupelets stick to each other instead of the structure, leaving them hollow. Michelle turned our recent find of farmers’ market black raspberries into a batch of really good jam, with the assertive flavor that Steve enjoys in a morning bowl of yogurt. “Sashay, Shante” everybody!

(adapted from Camille Glenn’s The Heritage of Southern Cooking)

Rinse berries and drain well. Put berries in a heavy saucepan with 1 cup of sugar. Stir and marinate for 5 minutes.

Bring berries and sugar gradually to a rolling boil. Cook, skimming off foam, for 5 minutes.

Add remaining cup of sugar and lemon juice. Boil “rather fast,” skimming occasionally, until the mixture reaches 220 degrees on a candy thermometer.

Remove pan from heat. Pour into a bowl. Let stand, covered with cheesecloth, overnight.  (As Glenn teaches, jam should be made in small batches. If you want to make another batch, do so. Then mix together in the same bowl.)

The next day, pour the jam into jars that have been sterilized by boiling in water for approximately 10 minutes. Leave a 1/4 to 1/2 inch headroom. Once cooled, freeze. In the middle of winter, thaw, and you will have a little bit of summer.