As we’ve mentioned, Michelle has hundreds of cookbooks, enjoying the authors’ stories as much as (and in some cases more than) the recipes themselves.  What we didn’t mention is she got this way with the help of her mother.  In a recent purge of some of her own innumerable cookbooks, Michelle’s mom gifted Gourmandistan with several volumes, the only real value of most being in the currency of camp, or perhaps of Schadenfreudeistan. (The Joanne & Rick Pitino Wildcat Cookbook would fetch quite a high price there, its homespun artifice hiding layers of greed, desire, and profound embarrassment underneath recipes such as Louie Dampier’s “Baloney [sometimes spelled Bologna] and Onion Sandwich.”) 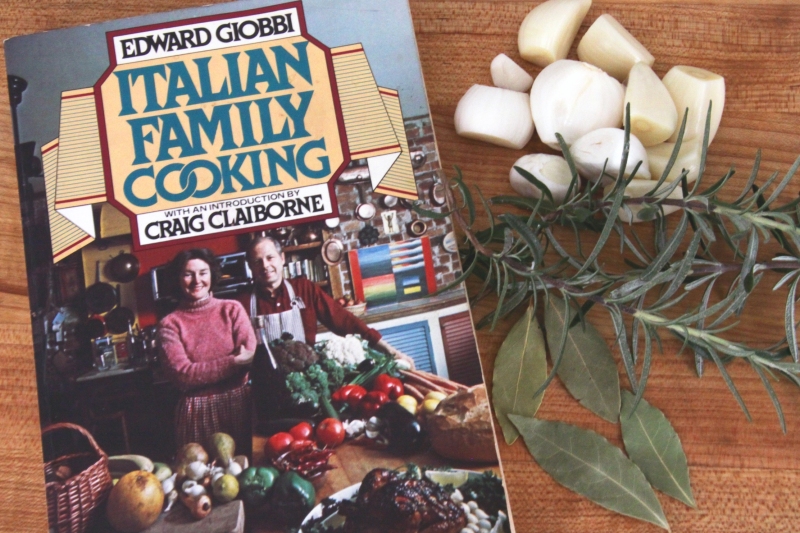 When we first saw Edward Giobbi’s Italian Family Cooking from 1972, we noticed the dated cover and the “Madisonville North Hopkins High School Library” stamp. (Michelle’s mom was the librarian there, and we hope that the statute of limitations for book stealing has long expired). We were intrigued by the promise of a Craig Claiborne introduction, however, and when we started leafing through the book we realized that something was different than the other donated books. This wasn’t camp—it was a great cookbook.  The recipes looked incredible, Giobbi’s Italian dishes reminding us of Richard Olney’s French ones of the same era.  When polyester-clad Americans were arguing whether “real men eat quiche” while dazzled by disco balls, both these American artists went against the grain and looked back to simpler, real food.

Rabbit, having almost no fat, can be difficult to cook properly.  For years, we’ve purchased fresh rabbit from Mrs. Duncan at the Bardstown Road Farmers Market.  We’ve made some decent recipes, but nothing coming out of our kitchen ever came close to the rabbit dishes we’ve enjoyed in Europe.  So we were keen to try Giobbi’s rabbit variations.  We chose “Coniglio in Gialmi.”  We tried to find the literal Italian meaning of “Gialmi,” but Steve’s Internet Italian searches were in vain. (We can tell you that “Coniglio” is Italian for “rabbit.”) From now on in Gourmandistan, until some Italian speaker tells us different, “Gialmi” means “the easiest, most delicious rabbit dish we’ve ever cooked.”  A one-pan dish that becomes a sort of rabbit confit—tender, garlicky and with a surprising and pleasing crusty finish.  “Coniglio in Gialmi” has appeared on our table twice in as many weeks. And we still have another bunny left in the freezer. 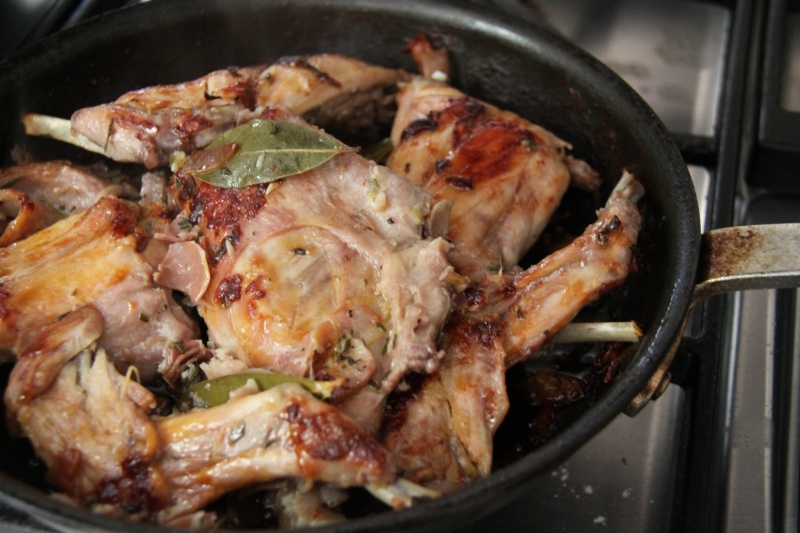 Arrange rabbit in a skillet.  Sprinkle with remaining ingredients.  Cover and cook over low heat until rabbit is tender, about 1-1/2 to 2 hours.  When liquid has cooked off, let rabbit brown and then turn on other side to brown also, being careful not to let prosciutto and garlic burn.