While Gourmandistan’s borders are stuffed full of scanners, digital cameras, electronic readers and other delightful devices of our electronic age, our population still clings to print, especially when it comes to cooking. Shopping lists are usually written on scraps of paper (although Steve sometimes transcribes them to his iPhone). Our shelves groan with heavy cookbooks, which Michelle recently reorganized to make room for more.  As we had a lot of leftover poultry flesh from Steve’s recent rescue of the little lost turkey, we recently turned to the January/February 1986 Cook’s Magazine (the predecessor of Cook’s Illustrated) for Miriam Ungerer’s pot pie. Michelle has been carrying around this particular periodical  since law school, its pages now crunchy from age.

Looking back through the publication on its 25th anniversary, we couldn’t find many references to “local” or “organic,” although a small article on potato dishes by Alice Waters basically advises people to grow their own. A “Who’s Who” page prominently features Wolfgang Puck and Paul Prudhomme, while a young Emeril Lagasse pops up in the back pages as chef of Commander’s Palace. The magazine’s foretelling of “The New Modular Cuisine” may have come true, as America is now accustomed to tapas bars and Bagel Bites® (Jingle: “Pizza in the morning, pizza in the evening, pizza at suppertime; when pizza’s on a bagel, you can eat pizza anytime!”).

The pot pie recipe has seen Gourmandistan through many years, modified by Michelle’s instincts and evolving tastes (and Steve’s ability to learn pastry making). It takes a bit of effort (and a bit of cream), but the results are worth it—rich, savory and, in Michelle’s version, spiked with a touch of sherry. We’ve made it with chicken and turkey and, recently for a hospital patient, leftover roast lamb. In fact, the recipe has been altered so many times, we hardly know why we bother to look at it anymore. 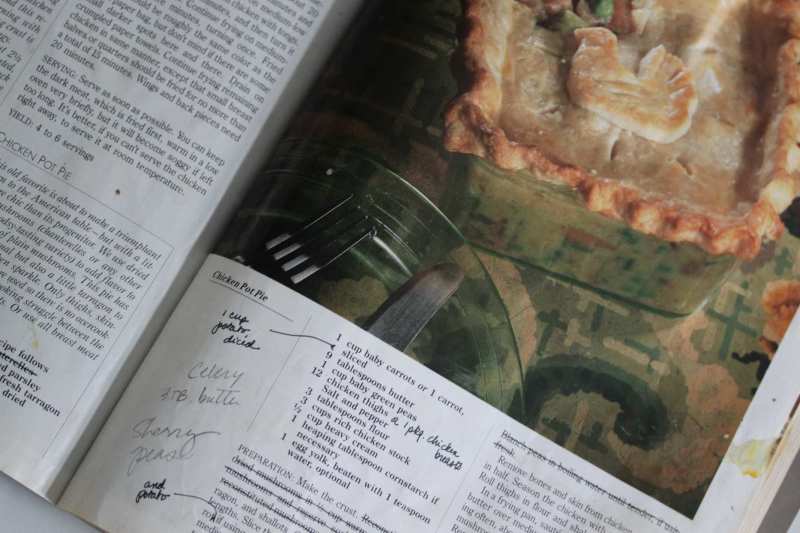 The Winter ’86 issue’s pages are wrinkled, stained and scribbled on, and after all this time we’ve never made another recipe from the magazine. Yet we never cut out the page, scanned it into an album, or typed it up in its altered form—until now. A Reagan-era return to nostalgia, improved by Gourmandistan and the rise of Reagan-nemesis “hippie” locavore sensibilities, digitized for easy access. You’re welcome, Internet! 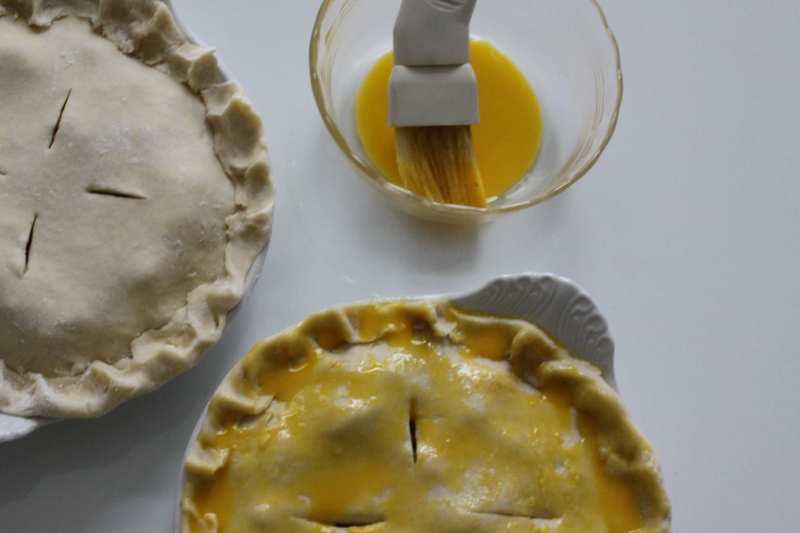 CHICKEN (OR TURKEY OR LAMB OR BEEF) POT PIE

Make the crust, then refrigerate.

Mince the parsley and other herbs. Chop onions or equivalents, and chop or slice whatever vegetables you’re using. If using carrots or potatoes or celery or fresh green beans, boil separately in salted water until each is just shy of done.  Drain and shock with cold water.

In a frying pan, sauté onions in approximately 4 TB. of butter in a large skillet over medium heat until just colored, turning often, about 10 minutes. Add fresh mushrooms (if using).  When mushrooms are done, remove mixture from skillet and set aside.

Melt 3 TB. of butter in skillet.  Stir in the flour, adding more butter if needed to absorb it, and cook for a few minutes until flour taste is gone. Pour in stock, stirring over medium heat until smooth.  Add parsley and herbs, meat and vegetables.  If using dried mushrooms, you can add the water (strained) that you used to reconstitute them. Stir in cream or crème fraîche. Season with salt and pepper and sherry to taste.  The sauce should be the consistency of a medium béchamel. If the sauce seems too thin, mix together a thick paste of cold water and cornstarch and stir into the mixture.

Pour chicken and vegetables into a deep pie pan or shallow soufflé dish.  Or, you can make 4 individual pies in small gratin dishes.

On a floured piece of waxed paper, roll out the pastry to about 1/8-inch thick (in a circle slightly larger than the pan you are baking in) and center it over the pie. (Or divide in fourths and do the same thing.)  Flute the edges over the rim of the dish, and cut a few steam holes in the center of the crust.  You can brush the crust with the egg wash.  Or not. This time, we decided it was better without. But we might change our minds next time.

Bake pie(s) in a 400° oven until golden brown, about 30 minutes.  It is a good idea to bake on a cookie sheet, in case the filling boils over.  If you make pies ahead of time and refrigerate (which you can), baking may take a bit longer.