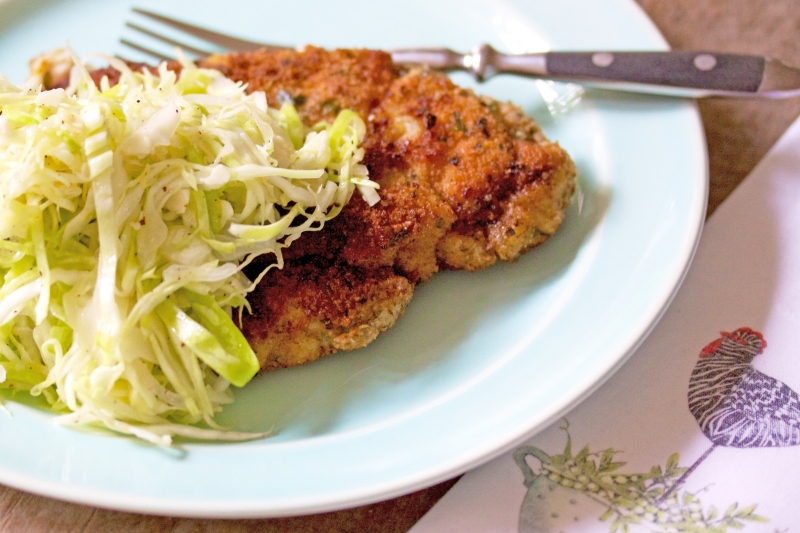 We’ve become quite attached to chicken bones. Not simply because in Gourmandistan most of them find their way into the stock pot. We’d also become convinced that boneless, skinless chicken breasts had no taste. We turned away from scallopine and piccata, towards baked or braised bone-in, skin-on breasts with garlic, wine and other good things. But a few recent purchases from Shannon Young of Stone Run Farms turned us around to the bare breast, and allowed us to revive a variation of a favorite quick meal—lemony breaded chicken breasts dressed with a simple salad.

Michelle cottoned to the idea of dressed greens atop a crunchy protein around the turn of the century after buying Sally Schneider’s A New Way to Cook.  Back then, we were still suffering with watery, bland grocery chicken or turkey breasts and inhumanely-raised veal. Even so, a salad of peppery greens (like watercress) atop a breaded, Milanese-style meat was pretty tasty.  We recently added a new wrinkle to our old recipe, adapting a cabbage slaw from a Donna Hay recipe to go with an herb-flecked, tangy-tart boneless chicken breast.

A little pounding, a quick dip in flour, egg with lemon juice and herbed breadcrumbs, a little fry and you’re golden. Add the slaw and you’re right back where America has always been—hopelessly infatuated with naked breasts.

Put flour in a flat bowl.  Whisk egg and lemon juice together in a second flat bowl.  Mix bread crumbs and chopped herbs in a third.

Pound chicken cutlets to a thickness of approximately 1/2 inch.  Sprinkle with salt and pepper on both sides.

Dredge the breasts on both sides in flour, then in the egg mixture, then in the bread crumbs.  Set on a plate.

Cook breaded breasts in olive oil over medium to medium-high heat.  Turn.  Remove when both sides are brown.  Drain on paper towels.

Serve topped with dressed greens, or the cabbage salad referenced above.