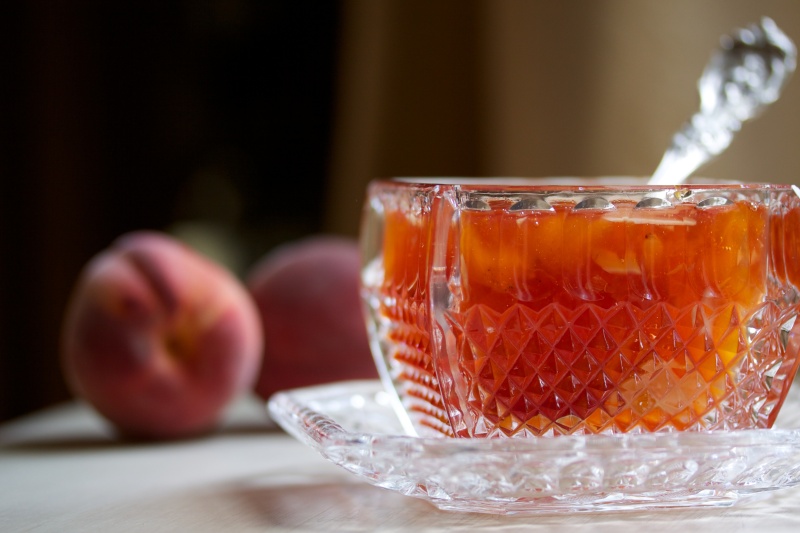 While peaches have appeared at our local markets, the best part of our region’s yield may be yet to appear. Steve wasn’t too impressed with the size or flavor of the fruits we found last weekend, so he was judicious with his purchases. “Judicious,” of course, meant he only bought half of Mrs. Deutsch’s supply instead of the whole thing—so that, plus the bunch he bought from another market, made another jam session essential.

Michelle, in a bit of penance for wasting a heap of fat, juicy peaches in an overly-gingered, runny preserve last year (from a Camille Glenn recipe no less), actually made two kinds of jam. The plain peach from a Martha Stewart recipe has a lovely sunrise-red hue and (cooked substantially longer than the recipe called for) an almost buttery texture, while this chunky blend of lemon, orange, almond and peaches is tart and spicy.

Steve has enjoyed both versions, as well as some peach ice cream and a blueberry-peach cobbler that took care of this week’s supply. As the weekend nears, Steve thinks of peaches, as Michelle thinks of her dwindling freezer space and the endless watching of boiling pots. Peachy.

PEACH PRESERVES WITH GINGER AND ALMONDS

Combine peaches, lemons and oranges and their peels in an enamel or stainless steel pan.  Simmer gently for about 15 minutes, until peels are tender.  Add sugar and ginger.  Bring to a boil, stirring until sugar is dissolved.  Boil until mixture reaches 222 degrees on a candy thermometer.  Add the almonds near the end of cooking.

Pour into sterilized jars and process or, as we do, freeze instead.