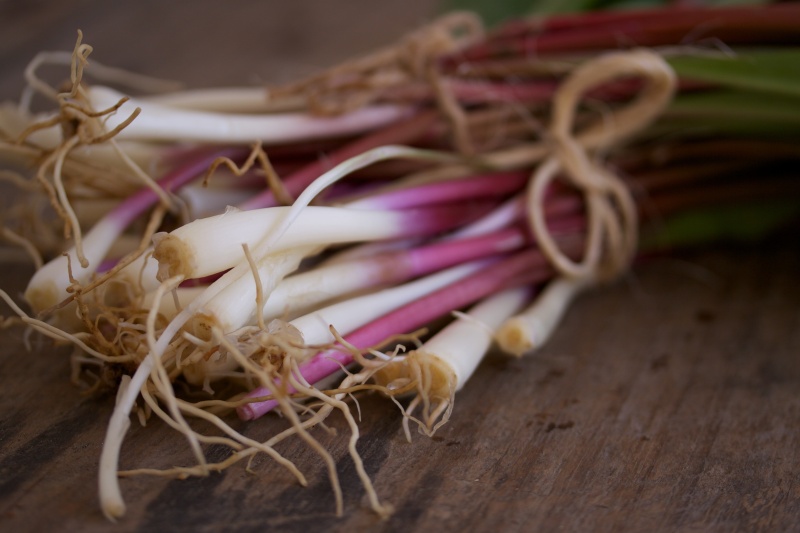 We have been almost desperately waiting for local greens, especially with this spring’s too-warm start. Last Saturday, as Steve was off wallowing in the depths of March Madness, Michelle spied some ramps at our local farm store. As Steve returned later that afternoon, gluing his eyes back to televised basketball, Michelle busied herself finding a good way to celebrate the arrival of these delicate, oniony sprigs.

What are ramps, you might ask? Let’s let some nice horticulturists explain:

Ramps, (Allium tricoccum or Allium tricoccum var. burdickii, Alliaceae) also known as wild leeks, are native to the Appalachian mountain region in eastern North America. Ramps can be found growing in patches in rich, moist, deciduous forests as far north as Canada, west to Missouri and Minnesota, and south to North Carolina and Tennessee. As one of the first plants to emerge in the spring, ramps were traditionally consumed as the seasons first “greens.” They were considered a tonic because they provided necessary vitamins and minerals following long winter months without access to fresh fruits and vegetables. Ramps are pleasant to eat and taste like spring onions with a strong garlic-like aroma. 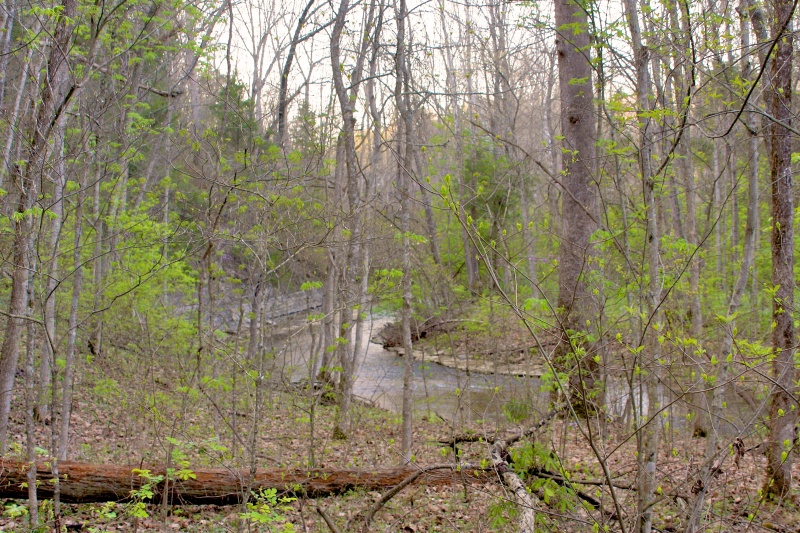 Ramps don’t travel well (the ones Michelle bought were already wilting when she got home from the store just two miles away), but to the onion-inclined their flavor is delightful. Michelle found two ways to use them for one meal. The first was a ramp-fueled riff on a beef daube from Patricia Wells At Home In Provence. We liked the lightness of white wine with beef versus the more traditional red, and the ramps plus a couple of shallots breathed their hints of garlic and onion into the mustard-spiked sauce. To go with her stew Michelle added ramp leaves to “Light and Tasty Corn Cakes” from Pride of Kentucky, a cookbook sponsored in part by the University of Kentucky’s Department of Agriculture. (Steve would like to remind our audience that the UK Wildcats have once again made the NCAA Final Four. Michelle would like to add that, even though she is surrounded by frenzied fan talk, she really doesn’t care.)

This success with ramps had us wondering if our little patch of wet woodland might hold some, along with maybe a morel mushroom or two. So, Michelle tore her sports-addled spouse away from his searching of ESPN for Anthony Davis news to wander outside for a bit. We found neither ramps nor morels, but there were some lovely wildflowers—and for a while, absolutely no talk of basketball.

(adapted from Patricia Wells At Home In Provence)

Heat oil in Dutch oven.  Brown beef, in batches without crowding.  Transfer to a platter when done, then add salt and pepper.

If anything more than a thin film of fat remains in the pot, discard it.  Add wine, scraping up any browned bits from the bottom.  Bring to a boil, then reduce heat and simmer for a few minutes.  Whisk in mustard.

Return beef to the pan, along with tomatoes and their liquid, shallots and ramps (or onions), garlic and bouquet garni.  Cover and simmer over low heat for 2-3 hours, until meat is tender.  Check seasoning and add salt and pepper as needed.

In meantime, bring some salted water to a boil in a small saucepan.  Add carrots, a sprig of thyme and sugar. Reduce heat and simmer until carrots are almost done.  Drain and set aside.

Also, while meat is cooking, remove peas from freezer and let warm to room temperature.

Remove meat and other solids from stew with a slotted spoon.  Boil sauce down over high heat until reduced by about a third.

Turn down heat to low, then return solids to the pan and add carrots and peas.

LIGHT & TASTY CORN CAKES (WITH OR WITHOUT RAMPS)

(adapted from Pride of Kentucky)

Drop 1/8 c. of batter at a time into a hot greased skillet.  Cook over low to medium heat until bubbles start to form on top of cakes.  Turn and cook until browned.  Drain on paper towels. Stir the batter each time before frying as it will settle. Hold cooked corn cakes in a warm oven until all are fried and ready to serve.