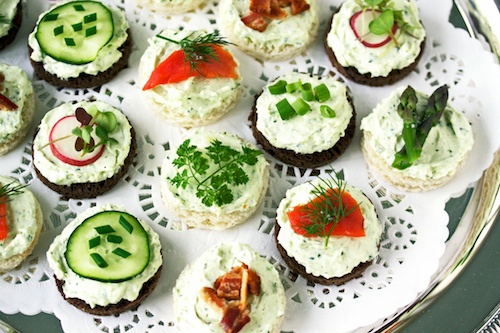 Once again, it’s Kentucky Derby time. Around here, locals like to tell Derby guests that Louisvillians love Benedictine. They are lying. Benedictine is boring, and often unpleasantly and artificially green. Yet somehow, it sits as a fixture of virtually every Derby buffet.

In her Boston Cooking-School Cook Book, Fannie Farmer, who trained eponymous Benedictine inventor Jennie C. Benedict, offered several “cream cheese salads” that seem more interesting. Her student, Benedict, who brought the cucumber-flavored cream cheese spread to the world, on the other hand never bothered  to put a recipe for it in several revisions of her famous Blue Ribbon Cook Book. Some assume the omission was an effort to keep the recipe secret. Gourmandistanis believe she thought the dish too simple and dull to describe. However, desperate for Derby-themed content (having already blogged our way through beef tenderloin and trademark-infringing dessert), we decided to try to liven the old girl up a bit.

After going to the grocery for an out-of-season cucumber (another reason we feel Benedictine should not be featured at Derby), we started with the spread itself. Most recipes call for cream cheese, cucumber, a little onion and, horrifyingly, green food coloring. We opted for fresh green garlic and green onion from our local market, with a bit of spring spinach for color. (Thanks to Charles Patteson’s Kentucky Cooking for the spinach tip!)

Louisvillians have made bacon Benedictine sandwiches for years (the need to add salt and fat = another indication that Benedictine is a dull dish). We sprinkled some crumbled crisp bacon over some of ours, and it definitely helped. But we still thought we could do better. We branched out with smoked salmon and dill, scallion and chervil, blanched asparagus spears, radish and microgreens, cucumber slices and chives and more variations. Every iteration improved Benedictine tea sandwiches a bit. But, while certainly prettier than the original, they were still pretty dull. 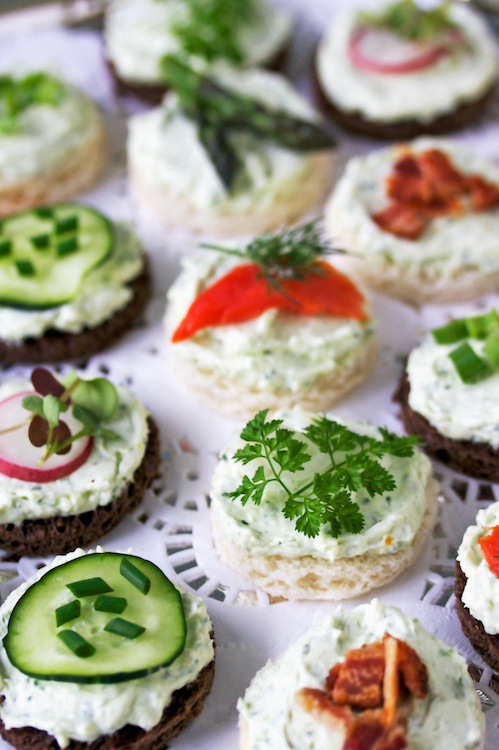 Are we traitors to our Louisville-area upbringing for bashing Benedictine? Probably, but that’s a small sin compared to our continuing disdain for attending the Derby. Truth is, people, going to the track isn’t that much fun these days (if it ever was). Also, that hat really doesn’t look good on you.

Grate cucumber with a box grater. Place in a sieve over a bowl and let drain. Squeeze out excess moisture.

Archival proof that Steve has actually been to the Derby.
(And, no, there are no photos of Michelle in a Derby hat.)