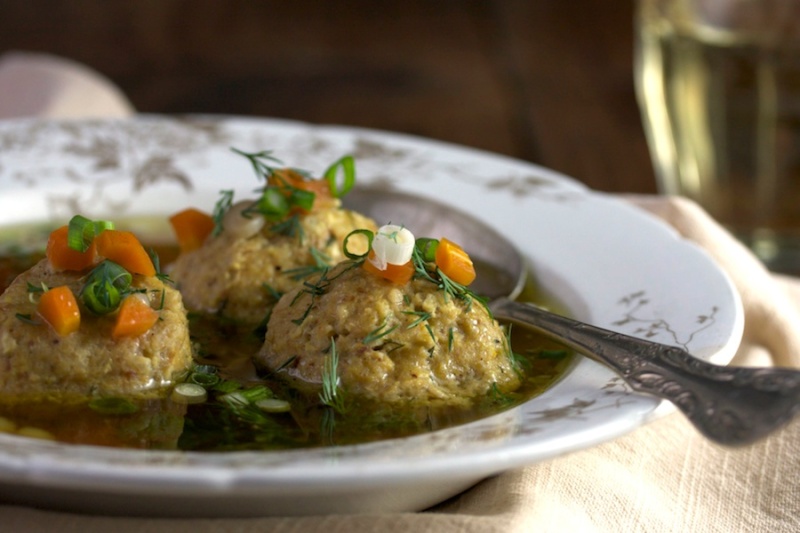 In her charming 1989 book, Cooking with Memories, Lora Brody had a chapter called “Gourmet Chicken Soup,” which related her dismay at a Passover Seder where she was forced to endure a “highfalutin’ chicken soup” that lacked matzo balls. She wrote that her mother made the comment, “Escoffier would be proud”—a sly insult because the promulgator of haute cuisine “wasn’t Jewish and neither … [was] this soup.” Brody continued the chapter by offering her own chicken soup recipe, which includes cubes of chicken bouillon added to raw chicken necks and backs plus “2 pullets or 1 large fowl,” simmered for two hours with some aromatics and then strained. If the soup seemed “very undersalted,” Brody recommended adding “another bouillon cube rather than straight salt.” 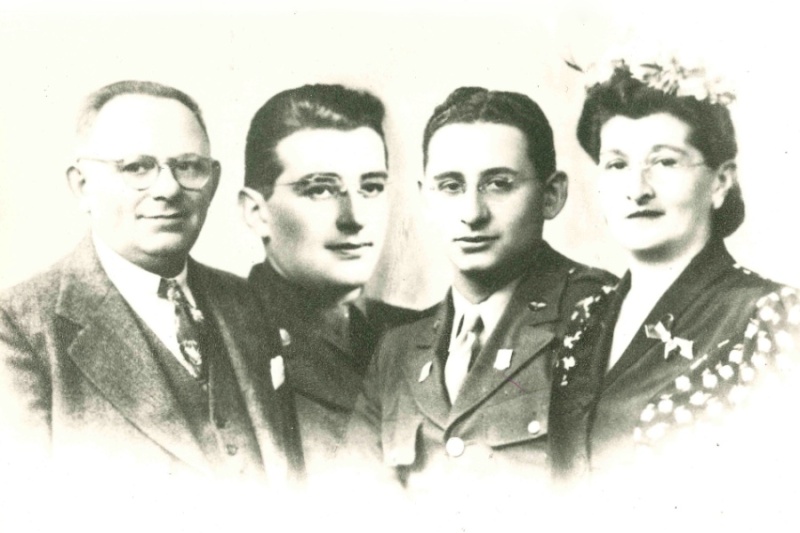 While Gourmandistan’s kosher bona fides are quite thin, we’re pretty confident about our ability to make chicken stock. Unlike (at least the 1989 version of) Brody and French housewives (who apparently love the stuff), we see adding processed bouillon cubes as an admission of defeat, not as a way to introduce more salt. Our roasted, long-simmered chicken stock is indeed dark brown—because “brown” means “tasty” in our language. But we will give Brody a bit of credit for her seltzer-less matzo balls, and her urging to eat them at times other than holidays. 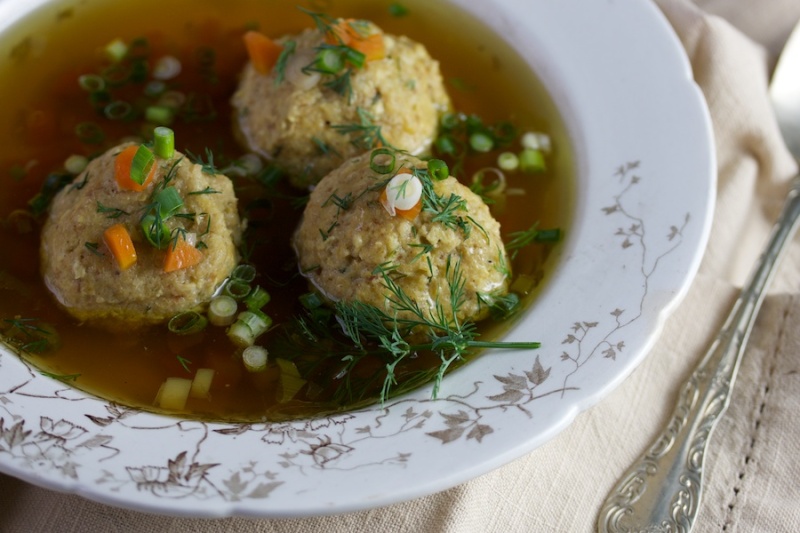 Steve was very familiar with bad matzo ball soup as a youth, his New York summers scattered with meals featuring blinding white, doughy, grapefruit-sized dumplings, half-submerged in a pale, vaguely chicken-tasting soup. Determined not to allow the tough, rubbery monstrosities into Gourmandistan, he started by making his own matzo, turning the results over to Michelle for the finish. When we looked for instruction, we found recipe after recipe featuring seltzer water for “lightness.” But while Gourmandistan has many sparkling things (inherited crystal, gift dreamcatchers and of course repartee), water isn’t usually one of them. Fortunately Brody (whose “Matzo Balls I” calls for four tablespoons of the stuff) included an un-carbonated alternative (“Matzo Balls II”) which uses beaten egg whites instead. 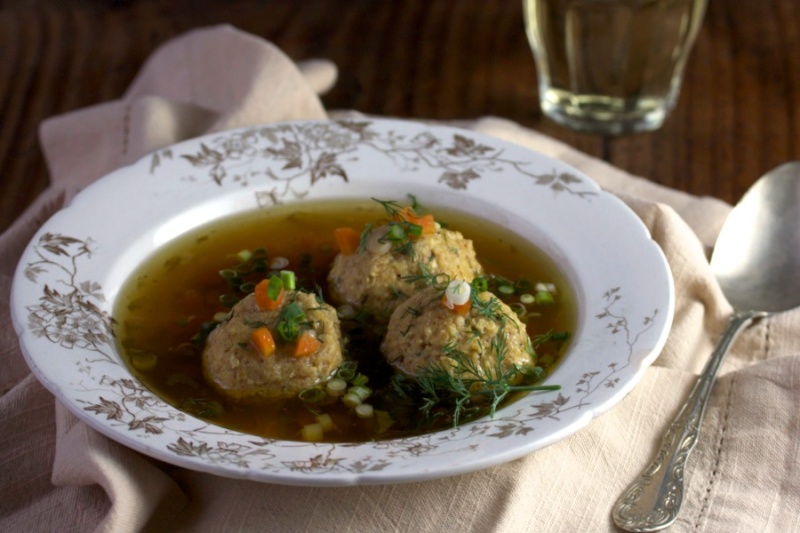 We put a few other “highfalutin'” touches on our soup, such as adding chives and parsley to the dumplings as well as some very small chopped vegetables to the broth. The matzo balls turned out light and very tasty, adding richness and flavor to an already (if we do say ourselves) marvelous stock. It may not please Lora Brody’s mother, but we’ll bet Escoffier would eat it any day of the week.

*You can buy matzo meal. Or, you can make your own by processing matzos (homemade if you like) in a food processor.

Sauté onion in chicken fat or butter. Set aside to cool.

Beat egg whites in another bowl until they form soft peaks.

Fold a fourth of the beaten whites into the yolk mixture. Sift half the meal on top of the mixture and fold in gently. Fold in remaining whites. Then, sift remaining meal over and fold in completely. Cover and refrigerate for one hour.

Bring chicken stock to a simmer in a large pot. Taste and add salt, if needed.

While stock is warming, cook carrots in boiling water for a few minutes until almost done but still a bit crunchy. Drain in a colander and shock with cold water. Set aside.

Gently form golf ball-sized balls from the matzo mix. Place on a platter or cutting board covered with plastic wrap. After all balls are formed, add to stock. Cover and simmer for 30 minutes.

To serve: Place several matzo balls in each soup bowl. Pour stock over. Sprinkle with blanched carrots, scallions and dill.