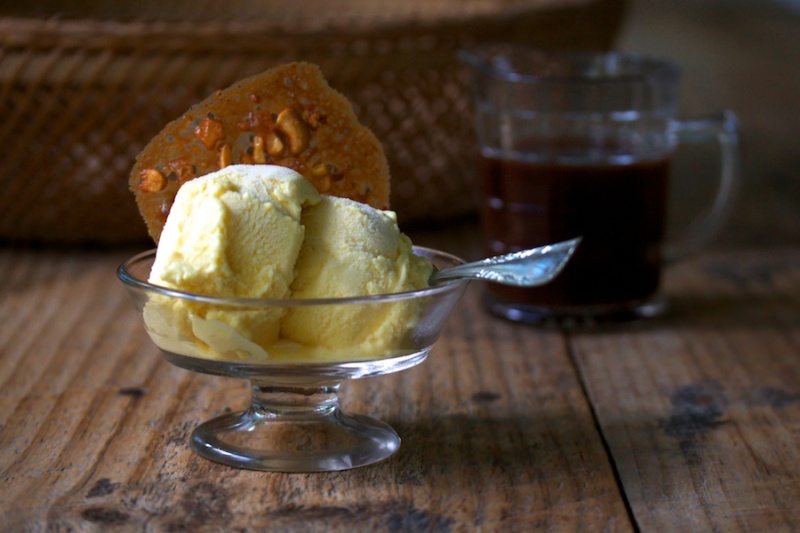 Even though we were raised within their growing range, pawpaws have been mostly a mystery to Gourmandistan. We were somewhat familiar with the song “Way Down Yonder In The Pawpaw Patch,” and were tempted many years ago by the offer of free pawpaw saplings from the Kentucky State University Land Grant Program. We turned them down, as we believed they would suffer the same fate as our other orchard (gnawed to death by deer). KSU is home to the world’s only “full-time pawpaw research program,” which seems to serve as the Internet’s primary source of pawpaw information. What is a pawpaw, you may ask? Let’s let the nice folks from KSU’s full-time program tell you:

The pawpaw is the largest edible fruit that is native to the United States. … [I]ndigenous to 26 states in the U.S., … [t]hey have provided delicious and nutritious food for Native Americans, European explorers and settlers, and wild animals.

Pawpaws also go by the names “poor man’s banana,” “Kentucky banana” and “American custard apple,” which give some idea of what the fruit tastes like. However, when Gourmandistan finally got our hands on some “Hoosier bananas” (yet another nickname), we found the flavors of banana and cherimoya (custard apple) were only the beginning of the pawpaw’s tropical tastes, especially after we decided to add some extra tropical notes.

The market vendor Steve scored the pawpaws from advised eating them raw, but Steve had ice cream in mind from the start. He knew that Michelle, who disdains most fruits that aren’t cooked and sugared and has a particular aversion to tropical fruits, which she often describes as having a “whang,” would be more receptive to a frozen treat. Having eaten durian ice cream, where the rotting-onion-with-cheese flavor was throttled down through chilliness, Steve believed pawpaw ice cream would reduce any perceived “whang” to a more tolerable level while letting the uncooked pawpaw flavor remain. Michelle made a basic Alice Waters custard, which we combined with the mashed-banana-feeling pulp to make a heavy, custardy ice cream with an intriguing, mysterious tropical flavor—a combination of spicy, sweet, sour and some sort of tang Steve insisted on calling “Life Savers Tropical Fruit flavor.” Even the mango-hating Michelle was pleased. 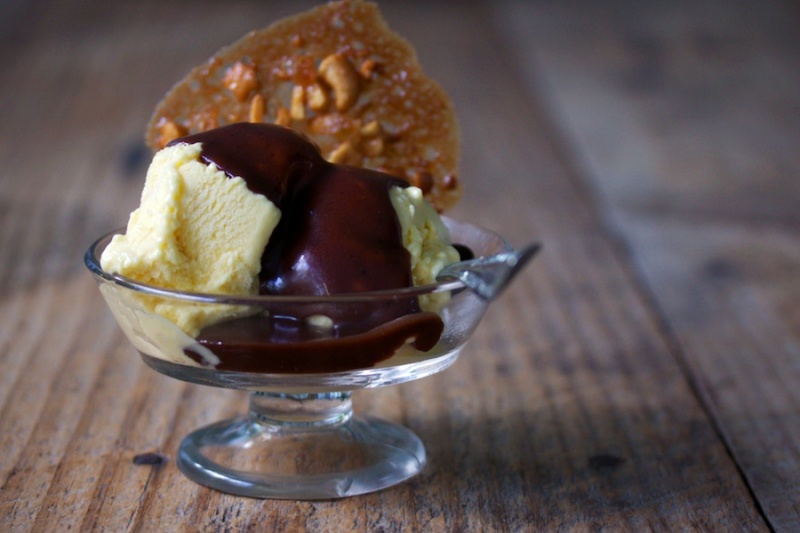 Steve suggested a chocolate sauce, and Michelle obliged, remembering a rum-spiked ice cream sauce from an old Maida Heatter cookbook. As predicted, the add-on proved to make the pawpaw ice cream even better. So while we have no idea if or when we’ll wander into a patch of pawpaws again, at least now (as long as there’s cream and a freezer about) we’ll know what to do.

Set a fine-meshed strainer over a heatproof bowl.

Whisk egg yolks together in a small bowl.

Clean pawpaws, discarding the skin and seeds. Place pulp in the bowl of a food processor and process. You should have about 1-1/2 c. (12 ounces) of pulp. Squeeze lime juice over.  Add honey, vanilla and salt and process again until smooth.

Stir pawpaw mixture into custard.  Freeze in an ice cream maker according to manufacturer’s directions.

Melt butter in a medium saucepan over low heat.  Add sugar, cocoa powder, rum, cream and salt. Stir over medium heat with a wooden spoon until mixture comes to a boil. Turn down heat to low and simmer for 5 minutes, stirring occasionally.

Remove from heat. Stir in espresso powder and vanilla.