We very much like this casserole, which is a fancied-up, fresher-tasting version of the boring grits and cheese concoctions usually found on Derby buffets. But we don’t like it nearly as much as last year’s Derby. Faithful, years-long readers of Gourmandistan (and oh, how we love you so very, very much) may recall our previous posts, where we tended to take “The Greatest Two Minutes in Sports” with our tongues planted firmly in our cheeks. Last year, however, as Steve’s editorship of Eater Louisville began to wind down, we scored one of Derby Day’s prized “gets”—press passes. 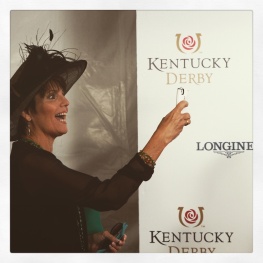 Even before 9/11 ruined everything for everyone, getting into Churchill Downs for Derby Day was sort of a hassle. After 9/11, everything changed into something much worse. Seat sections were cordoned off and tightly patrolled. Coolers, cameras, umbrellas and just about anything other than articles of clothing were completely banned, and traffic to and from the track got even worse. So the promise of free parking, a free shuttle bus, free food and unfettered access was too good to pass up—especially since Michelle was able to come along as Eater’s photographer. 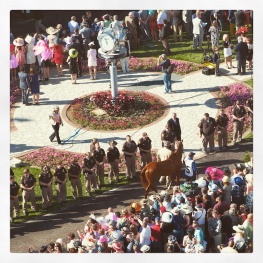 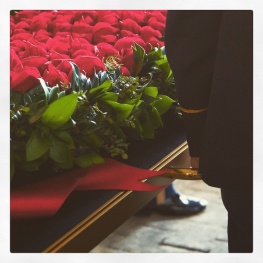 There was a bit of trouble getting the passes, as the good people of Churchill Downs are very busy that time of year (and Steve was a bit vague about exactly why a restaurant and nightlife website needed to be at the track). We finally got approval, and when Derby Day arrived, we put on comfortable, casual clothes (journalism!) and took off for a parking lot near Churchill Downs. We boarded a bus with several other media folk, and within minutes arrived at the press facility, where Michelle was loaned a very expensive Canon camera and lens. Steve did a little work and gawked at the people who really had to work that day.

Michelle amused herself mostly by taking pictures of Derby hats. 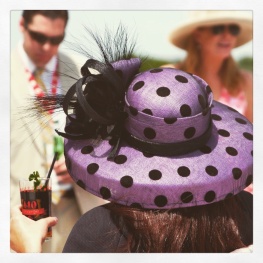 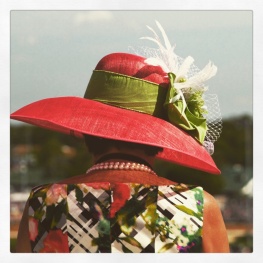 As we wandered off to explore the Downs, we noticed our passes lacked certain letter combinations, which we came to understand forbade our entry to certain areas we’d hoped to see (Millionaires Row, for example). Nonetheless our “media” status meant we had free access to just about everywhere else, including the track itself. Steve took advantage of this by taking a selfie as the horses approached the Derby starting gate, while Michelle cringed nearby. 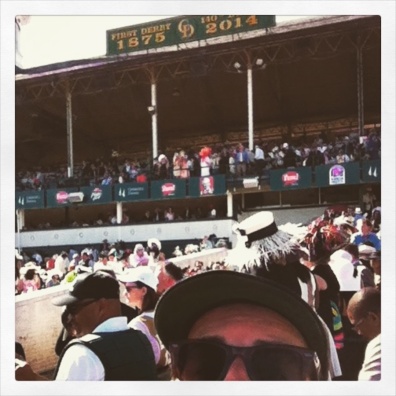 We didn’t place a bet, nor generate any particularly meaningful Eater posts. We can’t even remember who won the Derby (though we had a spectacular view of it). We will certainly enjoy this shrimp and grits combination as we get ready for May 2, 2015. But we know we won’t have nearly as good a time as we did last year—though Steve plans to spend part of the day scheming how to become an accepted part of the “media” again.

By the way, if you are coming to Louisville for the Derby, check out Steve’s restaurant and other suggestions published this week on Tasting Table.

Put grits in a bowl and add cold water to cover. Skim off and discard whatever chaff rises to the surface of the water. Drain the grits in a fine-meshed sieve.

Bring salted water to a boil in a medium saucepan. Slowly add grits, stirring with a wooden spoon. Cook at a simmer, stirring frequently, according to package directions (about 25 minutes using Kentucky Weisenberger grits).

Pour cooked grits into a buttered 12 x 9″ (or equivalent) baking dish and level out.

Clean baby artichokes, cut in half and place in a bowl of water and lemon juice until ready to cook. Drain artichokes and place in a pan of hot water to simmer for about 5 minutes. Strain. When cooled, cut artichoke pieces in half again.

Place shrimp in boiling water and cook for 2 minutes. Strain and shock in ice water. Shell and clean shrimp.

Melt butter in a large skillet. Add onion, mushrooms and garlic. Sauté until tender, stirring frequently. Add artichokes and toss for a few minutes. Add wine and cook until wine is almost gone. Then add shrimp and sprinkle with thyme. Toss well and season with salt and pepper.

Spoon the mixture over the grits, making sure that the shrimp and vegetables are evenly distributed.

Place the milk, onion slice, bay leaf and thyme in a medium saucepan. Steep over low to medium heat for 10 minutes. Strain, reserving the milk.

Clean out the saucepan, then return to heat and melt butter in it. Add flour and cook, whisking, for a couple of minutes until flour is cooked but not browned.

Slowly add milk, whisking. Continue to whisk until mixture is thickened. Season to taste with hot sauce, salt and pepper.

Spread the sauce over the vegetables and shrimp.

Toss melted butter and bread crumbs together. Stir in remaining ingredients. Sprinkle over the casserole.

Bake at 350° F until lightly browned and bubbling, 20-30 minutes. (Can be made ahead and refrigerated. Bring to room temperature before baking.)