Gourmandistan was happy to learn that our favorite baker and pork supplier had decided to raise a flock of guineas and offer them for sale at our local market. We’re fans of the better-than-chicken flavor of guineas, but worried our favorite way to cook poultry would result in a too-dry dinner. Looking for an alternative, Steve vetoed any recipe that called for quartering or deboning, and pointed out that our purchase contained neither liver nor giblets, which some other ideas called for. We found a simple-looking one-pot recipe in Stéphane Reynaud’s French Feasts—which (given our prior experience with the author) we immediately adapted in several ways.

The original recipe called for browning the bird in quite a bit of duck fat, then adding lots and lots of bacon along with cabbage and carrots. We thought this was a bad use of bacon. Instead, Steve rendered the fat from just a couple of rashers, then removed them and added enough duck fat for a nice brown. The rest of the job was just pitching in some wine and stock, adding vegetables and letting the whole thing slowly cook until the guinea became tender. Young leeks made the pot gravy more tasty, and potatoes added another nice way to sop things up. It seemed the guinea could not overcook, and ended up tender and moist both times we’ve made it so far. As a plus, we added back the crisped bacon pieces to the vegetables before serving (because of course we did). 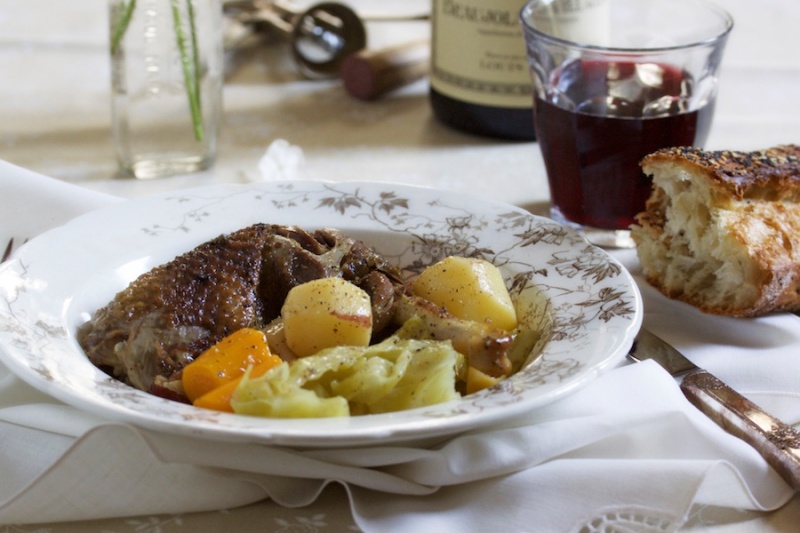 It’s a simple, somewhat foolproof way to enjoy guinea. So good it’s tempting us to have it again soon.

(adapted from Stéphane Reynaud’s French Feasts, or Ripailles for those of you outside the U.S.)

Season the guinea generously with salt and pepper and bring to room temperature.

Cook bacon in a heavy pot or Dutch oven. Remove bacon and drain on a paper towel, reserving.

Add duck fat to the bacon fat in the pot. Brown the guinea, turning to cook all sides. Add the wine and stock, bring to a boil, then reduce heat and cover the pot.

After the guinea has braised for 30 minutes, add the vegetables. Cover again and cook for about 45 minutes more, until the guinea legs move freely.

Remove guinea and cool for a bit, then carve. Crumble the bacon into the vegetables and sauce.

Serve guinea meat with vegetables and sauce and lots of crusty bread.