Having snapped up quite a few containers at a recent farmers’ market, Gourmandistan currently has a surfeit of dried beans. Trying to decide what to do with some of them, Michelle came across a recipe from Steve Sando, founder of the Rancho Gordo heirloom bean company patronized by chefs such as Thomas Keller. 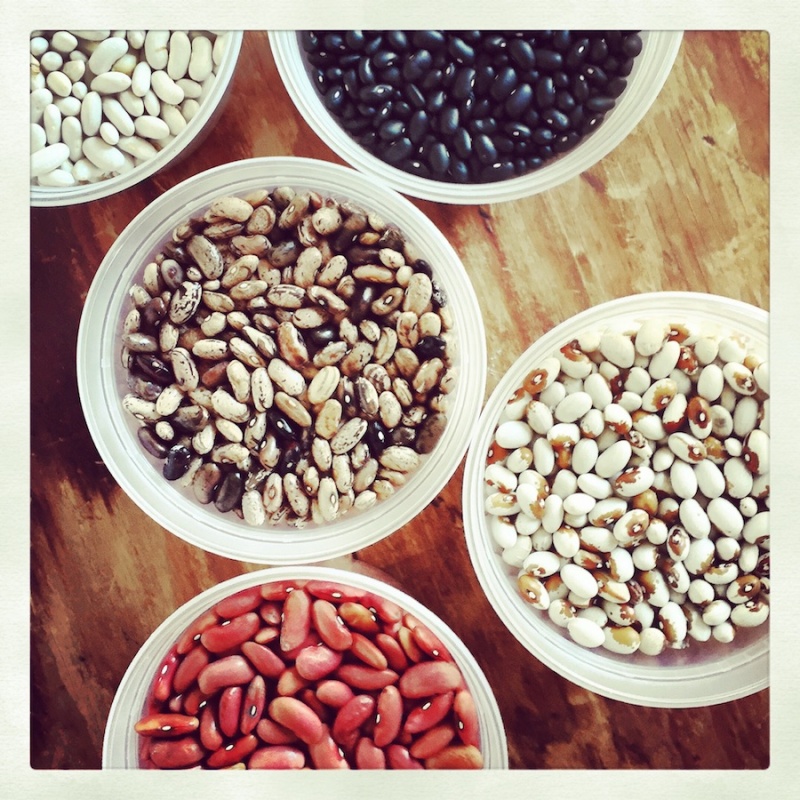 Sando’s recipe called for marrow beans, which are white. Since we had made white chili not long ago (reminder: buy our book!), Michelle went with a different hue, choosing instead red kidney beans. Sando said his recipe took “inspiration from North Africa,” so we scrounged in our pantry, refrigerator and freezer to find North-African-ish substitutes for pistachios, lemon zest and collards (we chose almonds, preserved lemons and spinach).

We’re not sure if we made it more “North African,” but we were “inspired” by the blend of spice, heat and sweetness in the stew. We still have many beans to go through—but this richly layered stew was a very good start.

Soak beans ahead of time if you want. We don’t usually bother. In a soup pot, cover beans generously with water. Bring to a boil, then reduce to a simmer.

While beans are cooking, toast coriander and cumin in a small skillet. Mash with a mortar and pestle or grind in a spice grinder.

Prick the sausage with a fork, then fry it in a skillet with a tiny bit of olive oil. (If the sausage is really fatty, you may have to cover with a lid.) Remove the sausage and drain on paper towels.

Discard most of the fat from the skillet, but keep at least a tablespoon or so. Fry the onion, celery and garlic in the fat from the sausage, tossing occasionally with a spatula, until the vegetables are soft and slightly browned. Stir in the coriander, cumin, Aleppo pepper, some salt and black pepper. Add the vegetable mixture to the beans.

Cut the cooked sausages into 1-1/2″ pieces and refrigerate.

Continue simmering the beans, covered, adding more water if necessary, until they are softened. Add parsley, preserved lemon, lemon juice and harissa. Check for seasoning. Can be made ahead to this point.

Remove sausage from refrigerator and warm in a skillet while soup is reheating. Just before serving, add spinach to beans and gently stir in.

Serve beans in bowls, topped with sausage pieces, almonds and a drizzle of honey.