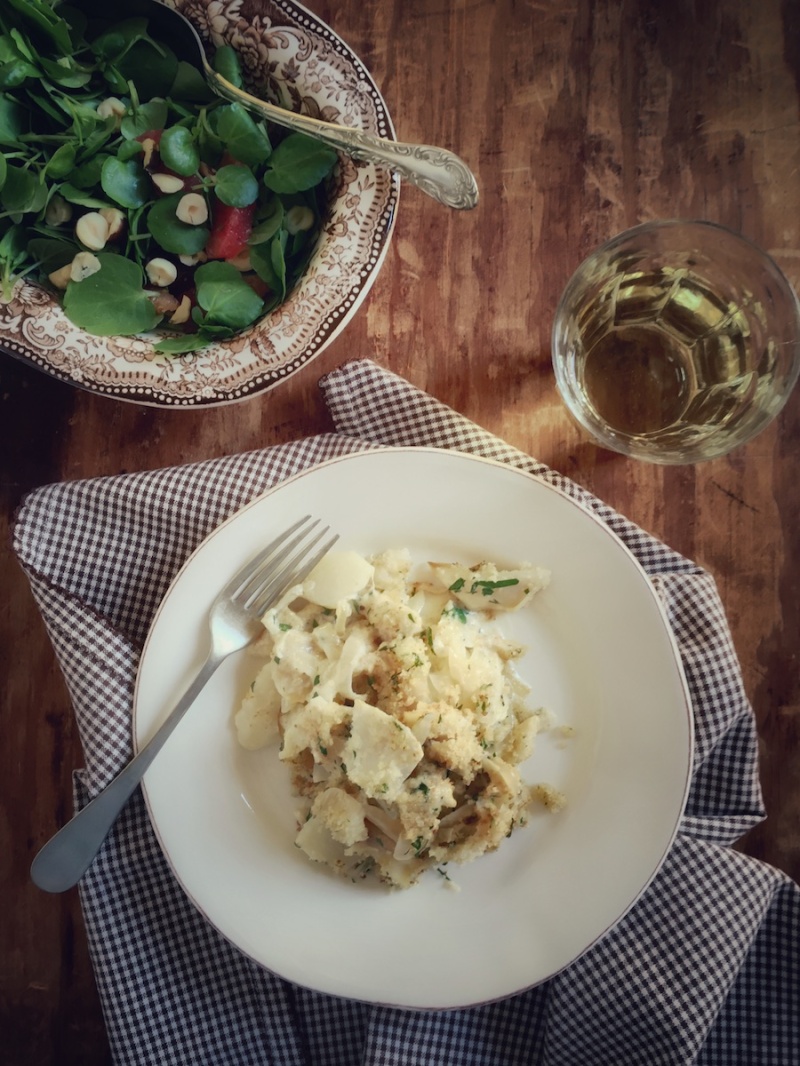 Nashville, Fall 1977. Two very different girls meet in a Vanderbilt University dormitory. One is visually-inclined, artistic, soft-spoken and sweet. The other is verbal, irreverent and opinionated. One had experienced private schools, exclusive high-rise Chicago Lakeshore Drive apartments, an artist mother and a stepfather whose family money came from woolen mills in Maine. The other attended public school in a Western Kentucky county where the main interests were coal mining and farming. While different from one another, what brought them together was not being “TVCs,” or “Typical Vanderbilt Coeds.” (A typical TVC conversation, delivered in syrupy Southern accents, went a little something like this: “Love your HAY-ER!” “THAAANK YEEWWWW!”) One of their other bonds was food.

Jane and Michelle spent hours and hours over many years sharing tips, techniques and food fantasies such as “The Perfect All-White Meal,” debating the merits of veal versus pork as they contemplated a palette of paleness for a repast allowed only for birthday celebrations. Their first shared kitchen, in a Junior year dormitory, often produced a meal including flank steak marinated with bottled salad dressing, Jane’s mother’s potato gratin (a “minimalist” concoction of potatoes, butter and about a ton of heavy cream) and Michelle’s Southern glazed carrots with lots of brown sugar. This was usually washed down with a bottle of Mouton Cadet. (See, kids, we kept things really classy in the late Seventies.)

Senior year, Michelle, Jane and another friend, Carolyn, took off for a somewhat chilly Spring Break on Hilton Head Island. 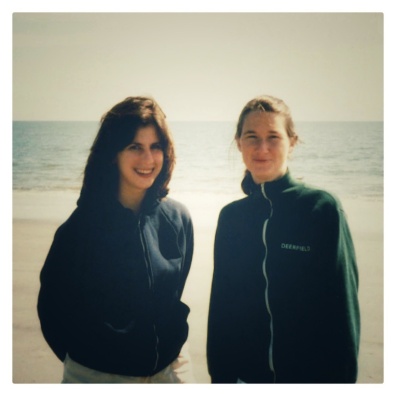 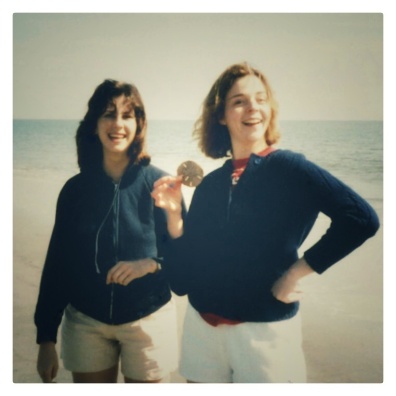 There they visited Jane’s artist mother and her husband, Parker (of the Maine woolen mills). Parker, a true New Englander, disdained the Calabash-style fried seafood most people eat when vacationing in the Palmetto State, instead insisting on serving the visiting college students his salt cod hash. 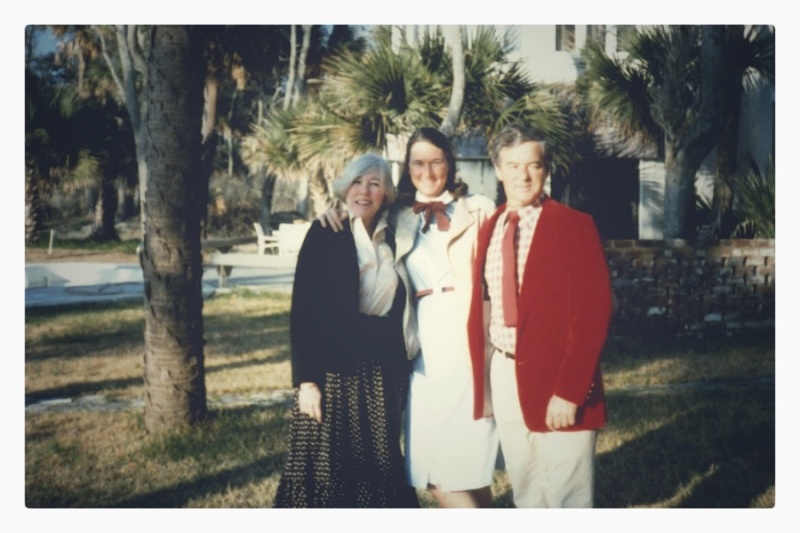 Don’t laugh too much at Jane’s dress. It might have belonged to Michelle.

Along with salt cod, Parker’s hash had some Yankee alchemy that fused salt pork, potatoes and heavy cream over hours and hours of cooking into something crusty, salty, creamy, and absolutely delicious. Michelle has never been able to experience anything like it again, except when Parker cooked it for her the weekend she attended Jane’s Chicago wedding in the mid-Eighties. Parker died some years ago, but Jane did share his recipe with Michelle. Despite several tries, Michelle has never been able to replicate Parker’s alchemy in Gourmandistan—something she felt less bad about after Jane admitted she couldn’t make it taste or look quite like Parker’s either.

Nearly 40 years later, one girl is in Southern California and the other still in the South. One has become more irreverent and opinionated, the other a bit more visual and artistic. The “different” girls text almost every day. And, occasionally, they get to cook together—roasting potimarron one autumn in Gascony and frying stuffed zucchini blossoms during another in Northern Italy. 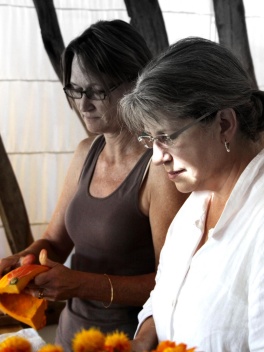 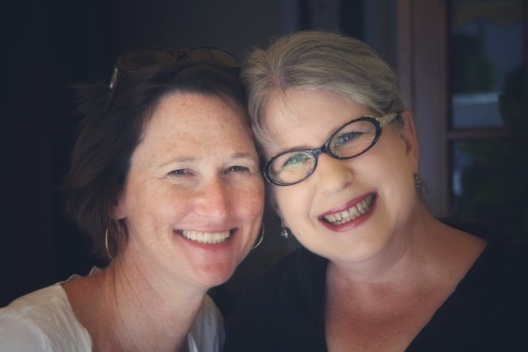 Their shared lives and their shared failure to recreate Parker’s hash gave Michelle an inspiration for a way to successfully use salt cod here in Gourmandistan. This salt cod gratin is sort of a combination of Jane’s mom’s potatoes and Parker’s hash. Some breadcrumbs and broiling give it a bit of crust, and butter and cream give it plenty of richness.  We think it’s a delicious mash-up that pays tribute to the influence of a wonderful friend. We hope Jane gets some salt cod and makes her own version very soon.

Melt 1 tablespoon of butter in a large skillet. Add the onions and a little salt. Cover. Cook, stirring occasionally, until onions are soft and slightly colored.

Cook the potatoes in salted water until they are tender, but not mushy. Drain.

Place the potatoes in a buttered large gratin or shallow casserole dish (about 8 x 12″) or in 4 to 6 buttered individual-serving gratin dishes. Season lightly with salt and pepper. Layer the cooked onions on top of the potatoes. Sprinkle about 2/3 of the chopped parsley over.

Drain the cod. Place in a saucepan with a bay leaf and cover with about 2 inches of water. Bring to a boil slowly, then reduce heat and poach for about 15 minutes. Drain the cod and dry with a clean towel.

When cool enough to do so, flake the cod with your fingers and place the pieces on top of the onions in the dish(es). Pour the cream over. Season lightly with salt and pepper. Cover with aluminum foil and bake in a 400° F oven for 15 (for small dishes) or 20 minutes (for a large dish).

While gratin is cooking, mix 1 or 2 tablespoons melted butter with breadcrumbs, remaining parsley and some pepper.

Remove aluminum foil and sprinkle breadcrumb mixture over gratin(s). Broil in the middle of the oven, watching carefully so it doesn’t burn, until crumbs are browned.