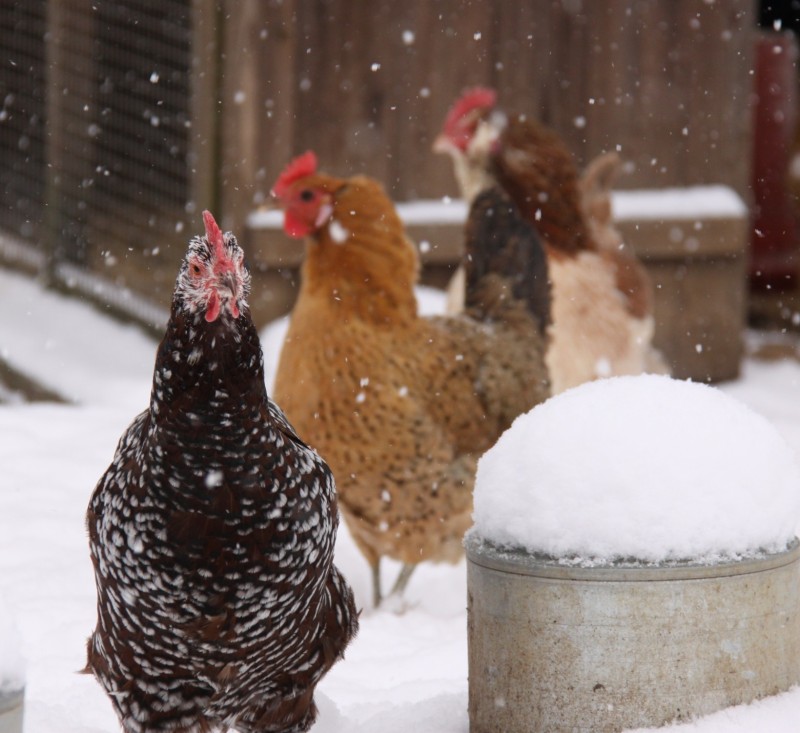 One of the Bobs, “Scabby” and a Faverolles

Dawn on Saturday found Steve rattling by his alma mater with a truckload of sleepy, mildly-protesting chickens, on his way to Marksbury Farm Market’s new Garrard County processing facility. As we neared Gourmandistan’s temporary relocation to Gascony, it was deemed time to retire the flock. We (OK, Steve) had winnowed a few from the flock earlier this year—but after dealing with four in one day, Steve decided he was no match for nineteen.

Michelle was drowsily dragged from her bed at 4:30 a.m., assisting Steve as he grabbed the hens and placed them in a couple of cages. (The rooster went into a old cardboard cat carrier, to spare the hens certain indignities on their final journey). Blankets thrown over the still-snoozing hens, Steve set off in darkness for Lancaster, a small town in central Kentucky.

The processing had been postponed a couple of times, as Marksbury Farm is just beginning operations, and the usual start-up problems occurred. Steve, who (somewhat ashamedly) counts a giant poultry agribusiness as a former client and (in some sort of simultaneous karmic payback) was forced to take the dreaded “factory tour,” has previous experience with processing lines. He was very impressed with Marksbury Farm’s operation, which claims a “commitment to sustainable, humane, and natural production methods.” Everything seemed spotless—which, granted, may have been in part because no chicken had yet gone through the line. But unlike Steve’s Upton Sinclair Jungle-esque experience in Indiana, the workers seemed lively, motivated and excited about their new venture in more humane processing. Since yet another opening day glitch had halted the expected 7:00 a.m. start time, Steve left the chickens in a few crates alongside a few hundred more chickens scheduled for that morning. The hens seemed much calmer than the Marksbury people, who were determinedly talking of circulator pumps and V-chutes as Steve drove off toward home.

As our farmer friend Jim Fiedler says of his pigs and cattle, we feel our flock really only had “one bad day.” Many of these hens spent 4-½ years happily bug-eating, dust-bathing and generally ruining what was once our garden, delighting in daily heaps of Gourmandistan leftovers and leavings. While the younger group of Faverolles and Wyandottes never really bonded with us, “The Bobs,” “Ugly” and “Scabby” may have actually appreciated our treatment. (At least, the one Bob Steve nursed back to health with antibiotics and Band-Aids after an owl attack may have.)

It’s been quite an odd past few days in Gourmandistan. Not hearing any Chewbacca-like noises coming from the chicken yard. Seeing a larger-than-usual kitchen compost pile now that apple cores and watermelon rinds are no longer easily disposed of. And having the strange realization that nothing, absolutely nothing, is making us get up at the break of dawn, and be home by shortly after dark. This oddness won’t last. We’ve already arranged for some laying hens to keep us in a few eggs this Winter, and plan to start a new flock from baby chicks in early Spring. But for now, Gourmandistan is poultry-free—until some new birds arrive to run our lives, enjoy running our grounds, and eventually have that one bad day.

We’re all clear and ready for the new year. Thanks for the ability to hydrate when we need it, OCWD!
Luckily it’s a night we have many incentives to drink something else. Happy New Year everyone—remember to cherish your resources!
Good night, Madisonville. #kentucky
Hope your holiday is much less miserable than this poor fellow’s. #xmas #hannukah #holiday #catsofinstagram
Much prettier when you don’t have to drive through it. #creek #ice #bridge
Travel is lovely, but being home is not always horrible. #kentucky #home
%d bloggers like this: