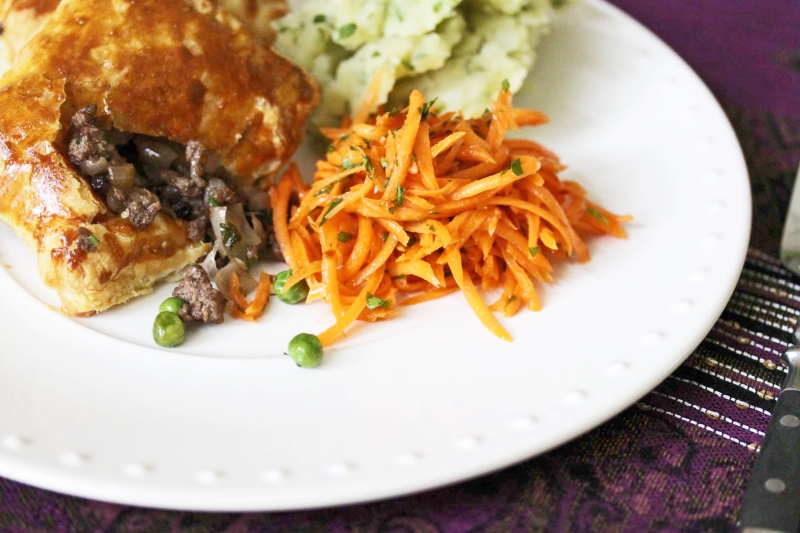 We received delivery of our second annual lamb from our neighbors, Gary and Joyce Keibler, of Hemmer Hill Farm.  This year the Keiblers wisely chose Marksbury Farm as the processor (where Steve took our chickens on their last day last Fall, chronicled here and here), avoiding our awkward acceptance of many strange bits and chunks along with the usual legs and chops. This year’s lamb could have leapt from an illustrated chart, with clearly identifiable shoulders, ribs and shanks.

No matter how you slice a lamb, however, when you buy a whole one you end up with a fair bit of ground meat—a perfectly acceptable food source in Gourmandistan. Our latest batch gave us the excuse to once again turn to Claudia Roden’s Arabesque, a wonderful cookbook focusing on Morocco, Turkey and Lebanon where we’ve found many good lamb recipes. This recipe came from the section on Turkey—a country we’ve never visited, though friends, including Foxlily, have.

We added frozen peas for a bright snap of greenness, and made smaller pies than the original recipe called for, some of which we froze for later. But seeing as we have two legs, two shoulders and quite a few chops to get through, it may be a while before we hit the pie box again.

(adapted from Claudia Roden’s Arabesque: A Taste of Morocco, Turkey, & Lebanon) (serves 4 as a main dish or 8 as an appetizer)

Fry onion in oil until soft and slightly caramelized.  Add lamb, salt, pepper and spices.  Break up pieces of meat with a fork or spatula.  Cook until meat is done and juices are absorbed.  Stir in pine nuts, currants, parsley and peas.  Let cool. Adjust seasoning, if needed.

Cut the thawed puff pastry into 8 pieces.  Roll out each piece a bit on a floured piece of wax paper with a floured rolling pin.  Flip a time or two, dusting each time with flour.  Spread a heaping tablespoon of filling onto one half of each piece of pastry (there will be filling left over, which is good to eat by itself).  Brush the edges of that half of pastry with egg white.  Fold pastry over to cover the filling.  Press edges with the tines of a fork.  Flip over and press the edges of the other side with the fork tines.

Bake for 25-30 minutes, until golden brown and puffed up.