Steve was very happy when Susan of the delightful Susan eats London gave a bloggy boost to his pressure on Michelle for more blueberry jam. Michelle had been avoiding making more for fear it would once again cook out too thick. But when Steve bought a few “extra” quarts at this Saturday’s market, she made another batch, and some sweet cream biscuits to boot. The chopped fresh lemon verbena in this version adds just a touch of herby tartness that plays up the sweet blueberry flavor. 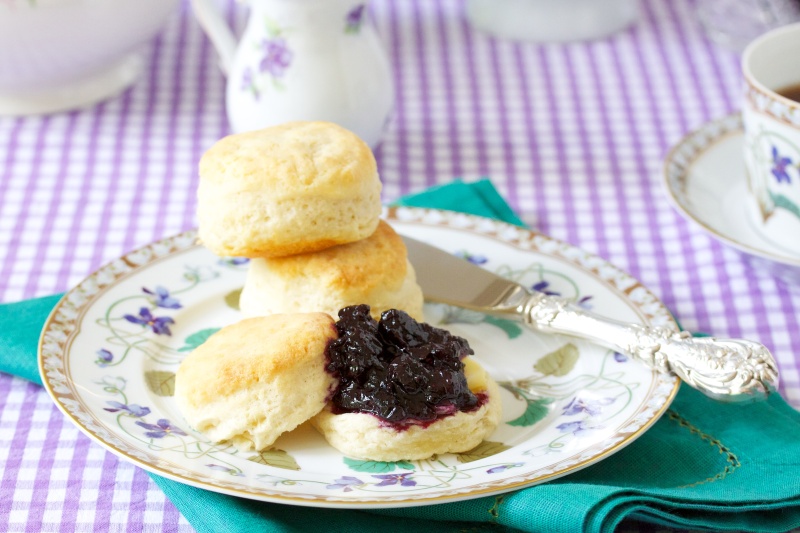 Steve happily scarfed up a couple of buttery jam-topped pre-photo-shoot biscuits and went off to the chicken yard to share baking scraps with the flock. He returned to find Michelle on the back porch with an afternoon tea set with Gourmandistan’s wedding china, a ceremony never actually performed within our borders. When asked why she was creating the impression that Gourmandistanis not only take tiffin, but do it in this fashion, Michelle (taking the patient tone she usually does when explaining things to Steve that seem obvious to everyone over the age of seven) answered that the pictures are just a fantasy—a vision of a lifestyle most people can only imagine, like “Downton Abbey” or “The Jewel in the Crown.”

One reason Michelle must explain this again and again to Steve is the fact that he stubbornly clings to a lesson he learned from “Schoolhouse Rock” around the age of seven: royalty sucks. Some find this sentiment confusing, given Steve’s penchant for staying in old castles and chateaux, swanning about expensive restaurants and writing as if he’s the poncy old laird of some imaginary fiefdom. However, Steve sees no conflict between expensive tastes, expansive vocabularies and equal opportunity for all. He even entertains the argument that the institution of dynastic monarchies helped foster the arts and sciences he so loves. And he understands that many people around the world in places such as the Netherlands and Britain view their royal families as a kind of menagerie of mostly adorable, mostly harmless (though very, very, very expensive) pets.

But Steve totally fails to understand how so many Americans can buy into this silly nonsense. From the country club dandy detailing his connections in Burke’s Peerage to the Tea Party soccer mom who grows misty-eyed at the mention of Princess Di, in Steve’s opinion, too many citizens of these United States forget something important: While dreaming of princes and princesses may be pleasant, supporting actual princes and princesses makes one a peasant.

So while Gourmandistan certainly wishes those in Britain a wonderful Jubilee weekend, we also wish the U.S. media would give us a break with the royalty-watching. July 4th is only a month away, people, and blueberry season will be over by then. Get busy jam-making now, and spend the rest of the time studying up on your Declaration of Independence.

Put blueberries, lemon juice, lemon verbena, lemon rind and water in a large saucepan.  Bring to a boil, and cook for 10 minutes.

Add sugar. (Note:  Allen recommends warming the sugar in the oven before adding.  We’ve made this recipe with warmed sugar and with sugar just out of the pantry.  To us, it really hasn’t made any appreciable difference.)  Stir until sugar is dissolved.  Boil until jam is set.  Typically, jam sets at 220° on a candy thermometer.  This one tends to set much earlier.  To determine if set, put a bit on a plate that has been in the refrigerator.  If jam wrinkles even a bit when pushed with your finger, it’s set.

Place in sterilized jars.  We never really “can” our jam, but simply stick the jars in the freezer.  It’s much easier that way, doesn’t steam up the kitchen like canning does and we don’t worry about killing someone with botulism or something like.

It’s a lovely day to visit our antique car, which we are slowly returning to its natural state. #volkswagenbeetle
We’re all clear and ready for the new year. Thanks for the ability to hydrate when we need it, OCWD!
Luckily it’s a night we have many incentives to drink something else. Happy New Year everyone—remember to cherish your resources!
Good night, Madisonville. #kentucky
Hope your holiday is much less miserable than this poor fellow’s. #xmas #hannukah #holiday #catsofinstagram
Much prettier when you don’t have to drive through it. #creek #ice #bridge
%d bloggers like this: