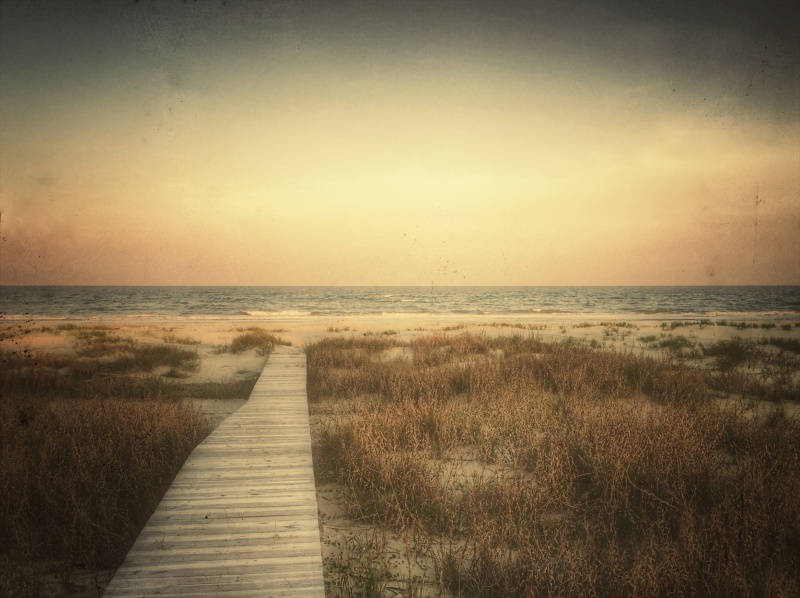 Yet another Dewees Island trip is drawing to a close. As we do at the shore, we indulged ourselves in local seafood, particularly shrimp, which Michelle managed to eat for at least one meal every day but one. Much as the local fishmongers might argue to the contrary, however, one cannot exist completely on shrimp. Instead, we present you with this delightful green bean, corn and okra salad.

Before we gift you with the recipe, we will again relate the loveliness of this little island jut a bit separated from Charleston, South Carolina. We found Dewees still delightfully deserted even through Memorial Day weekend, a time Americans traditionally jam just about any stretch of sand. Steve spent some quality time with his favorite tide pools, and managed to get dive-bombed with poop by a seabird protecting its nest. Michelle wandered the beach, had quite a few nice lunches in Charleston, managed to avoid bird poop (but not legal work) and managed to cook many delicious meals, most of which included shrimp. The debut of the green beans, corn and okra, however, did not.

We bought the corn, beans and okra at a farmers’ market on Johns Island. It was a somewhat hurried visit, as we were preparing to hunker down in the face of Tropical Storm Bonnie. (Of course, Steve still managed to score several kinds of fruit.) We returned to the island as the rain and winds grew heavier, spending the night monitoring local TV for weather updates. Fortunately Bonnie didn’t do much more than dump a lot of rain on Dewees, and everyone in our party actually enjoyed spending an entire day on the island. The rain and heavy sea warnings made our decision to stay on the island seem wise, but also meant we could not venture over to Charleston to purchase more shrimp. Instead we had hamburgers, and this lovely salad as one of the sides. Michelle found a version of this recipe from Food & Wine, but thought that roasting the vegetables before tossing them with this simple vinaigrette would be a good idea. She was right, and our shrimpless meal was delicious. 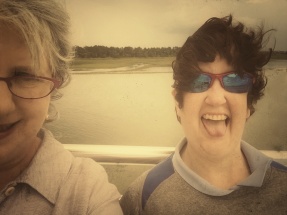 We will once again miss Dewees and the proximity to local shrimp (also the facts that Michelle’s dad pays for everything and her mom beautifully folds our clothes and makes the bed when we’re not looking). While we don’t think we would want to live on the South Carolina coast forever, it is certainly nice to visit every so often. We hope we can keep returning, but know that soon beans, corn and okra will arrive in Gourmandistan’s more permanent home. Then we can make this salad again, and shrimplessly remember our time at Dewees.

(inspired by this recipe in Food & Wine)

Preheat the oven to 350° F. Put the nuts in a pie plate and toast until browned. Set aside.

Increase oven temperature to 450° F (or perhaps higher if you’re in a rental house with a somewhat sketchy oven).

Remove kernels from corn. Toss corn kernels in a bowl with green bean and okra pieces and a small amount of olive oil (enough to lightly coat, but not drench). Spread oiled vegetables on a large baking sheet. Roast, tossing occasionally with a spatula, until vegetables have some char. Remove from oven and set aside to cool a bit.

Make a dressing out of the olive oil with the vinegar and season with salt and pepper.

Toss the scallions with the warm vegetables. Add dressing to taste. Just before serving, add nuts and parsley.