After 94 years of curiosity, crossword puzzles, conversations, travel and more, Steve’s “mom,” Filomena DeMarzo Farley, died last week. Fil was the older sister of Steve’s real mother, who died when he was a toddler. Fil was born in Orange, New Jersey and grew up as part of a large, interrelated Italian family. Gourmandistan has brought you bits of Fil’s childhood before, told through stories of struffoli and eggplant parmesan, and we may very well visit Mechanic Street again. But on the occasion of this farewell, we decided to do sukiyaki.

Fil and her husband, Fred, arrived in Louisville in 1958, part of the continuing expansion of General Electric’s Appliance Park. Along with many others benefiting from the post-war boom, the Farleys made friends among other GE families as well as neighbors and church members. Though their lives were slightly outside the norm of 1950s Louisville (adopted children/ward, extensive foreign travel, Unitarian beliefs), the Farleys’ lives closely mimicked the American baby boom ideal. They worked hard, were involved in civic affairs, enjoyed golf and bridge, and had 2.5 children (Steve alternated between being “son” and “nephew”) whom they treated to Howard Johnson’s and other chain meals on station-wagon road trips to places like Mount Rushmore and Yosemite National Park. Fil attended school meetings, shuttled kids to movies and music lessons, and led both a Girl Scout troop and the League of Women voters. 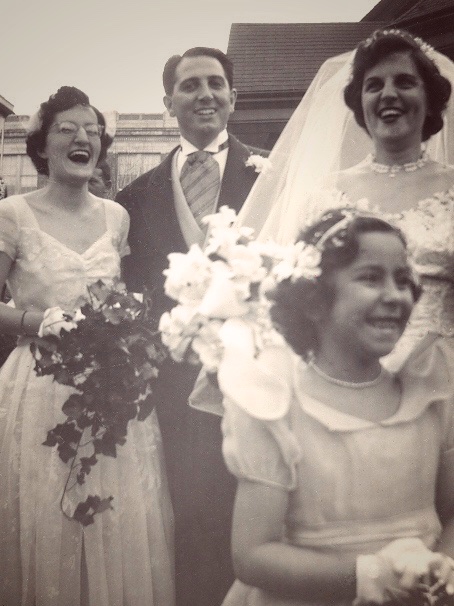 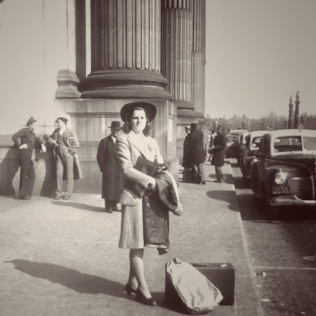 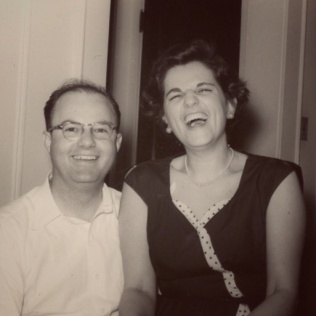 Fil’s cooking background was basically Italian food, but she gamely explored just about every other kind of cuisine. Her recipe card boxes still contain articles clipped from magazines and newspapers over many years, the story of a young wife striving to stay abreast of what people were exploring in the kitchen. 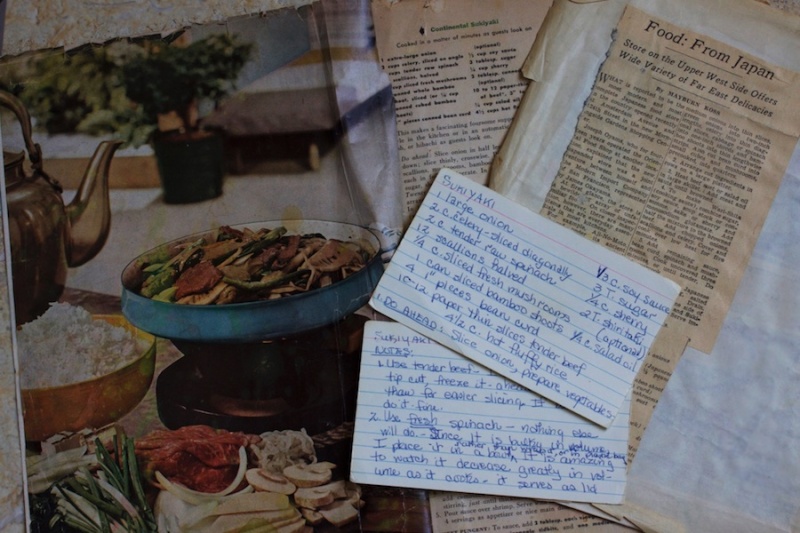 Sukiyaki was one dish with multiple references in Fil’s files, including a New York Times article from 1958 in what may have been the early stages of the Farleys’ planning to leave the East for Louisville. The Times recipe called for both monosodium glutamate and “wari-shita” sauce and may not be the version Steve remembers from his childhood. Others, including a magazine spread for “Continental Sukiyaki” and some handwritten index cards, left out the MSG but included canned bamboo shoots. It’s possible that Fil ended up creating a hybrid version of all these sources, a recipe that evolved over time and available ingredients. (Steve does not remember tofu in his sukiyaki, but he does remember canned water chestnuts.) Whatever kind of “sukiyaki” Fil’s became, Steve recalls the dish appearing often on nights the Farleys hosted a get-together such as their regular bridge club. And sukiyaki was a welcome shift from frozen TV dinners, a dish easy to reheat in the Farleys’ 1970s prototype microwave (one advantage of a household headed by a GE Range engineer). 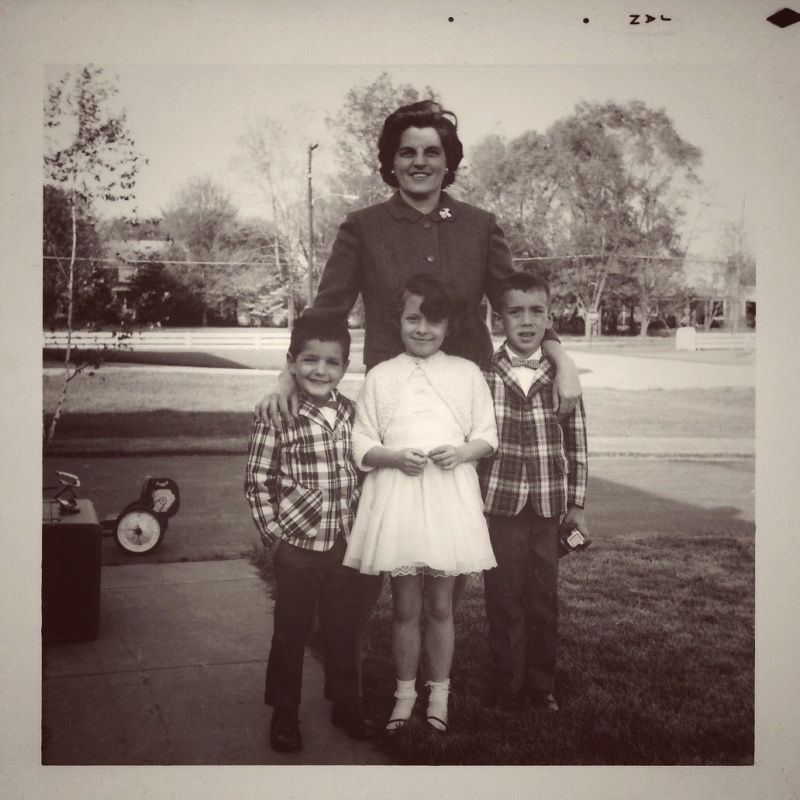 Since Fil had begun the process of adaptation, we felt perfectly fine updating her sukiyaki recipes to our own tastes. We took Fil’s articles and added insight from Kimiko Barber and Masaharu Morimoto, and took advantage of the seasonal freshness at our farmers’ market. (Fil was often amused at Gourmandistan’s devotion to local sourcing, saying it reminded her of her Italian immigrant grandmother.) Though we did think a slightly fattier cut of meat might work better, we greatly enjoyed the tender beef along with pea shoots and shirataki noodles, all in a sweet-salty sauce. It tasted even better on the second day over some rice. 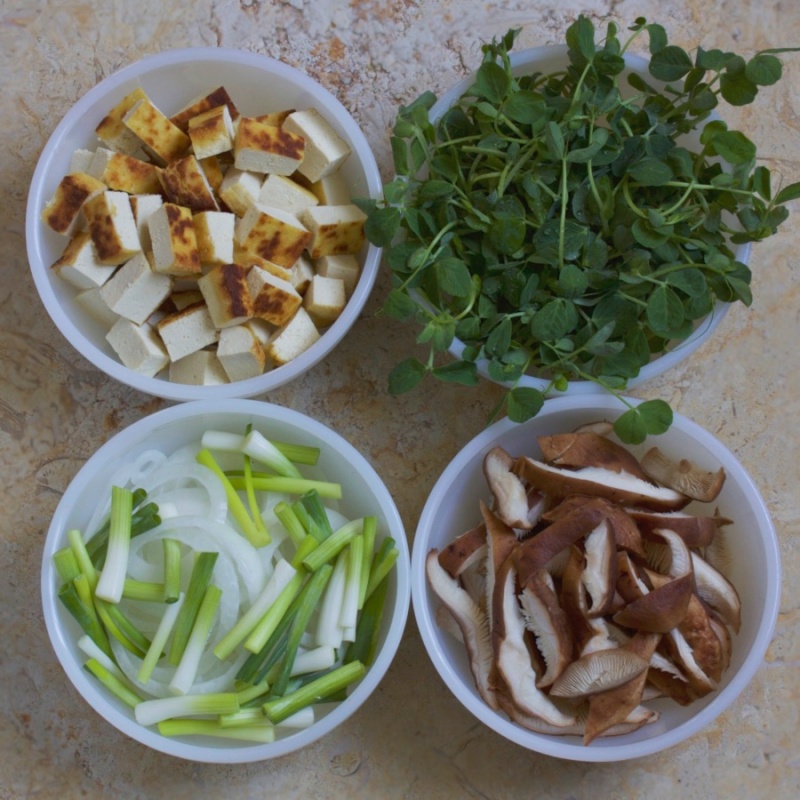 Fil lived a very good life, making friends all over the world through her travels even after the death of her husband. She remained active and engaged until the end, commenting on political affairs (“What’s going to be done about Donald Trump?”) on one of her very last days. Her passing was peaceful, with the ability to say goodbye to her closest family and friends before she left. While this sukiyaki salute may be insufficient, we think Fil might appreciate the humor. Sayonara, Mrs. Farley.

Mix sauce ingredients together in a jar and shake until sugar is fully incorporated.

Freeze beef for a bit, then slice very thinly. Cover and place in refrigerator.

Drain tofu, then wrap in a towel and press under a heavy weight for at least 30 minutes.

Lightly grease a skillet with oil. Grill tofu on both sides until browned. Drain on paper towels. When cool, cut into bite-sized pieces.

Drop shiratake noodles in boiling water, then simmer for a minute. Drain in a colander and rinse with cold water.

(Recipe can be done ahead to this point.)

Heat a little oil in a large frying pan. Add onion and scallions and cook over high heat until starting to color. Add half of the beef, tossing. Add half of the cooking sauce. Stir for a minute or so and then add rest of beef and rest of sauce. Reduce heat and add mushrooms.  After a couple of minutes, add shiratake noodles, stirring to incorporate. Then add pea shoots and cook just until wilted.