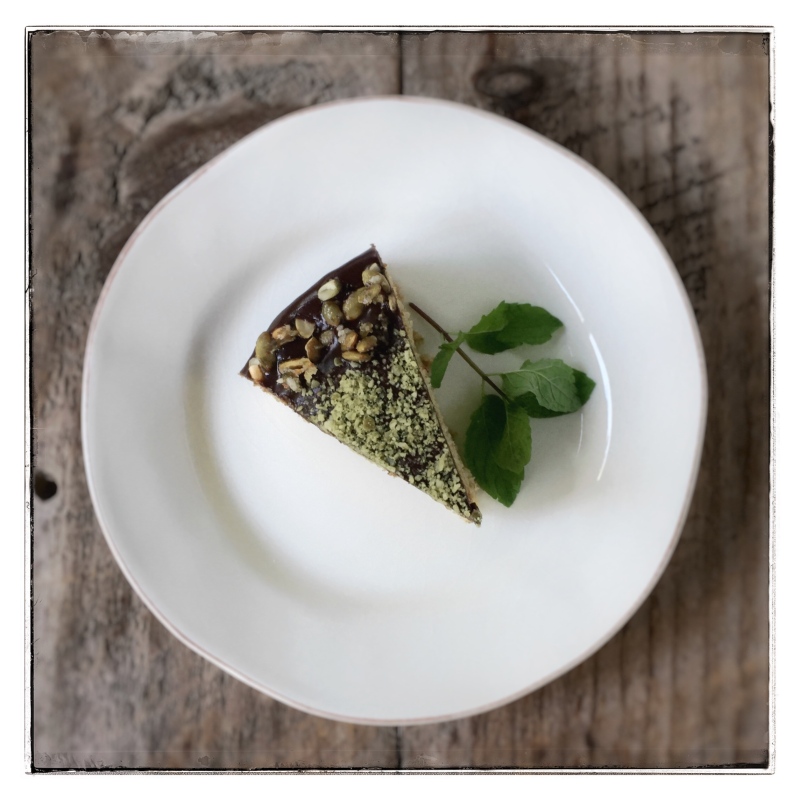 Gourmandistan has returned from a trip to the American West with photographs, a somewhat-reduced fear of heights and a strong urge to enjoy food made with our own hands. Thanks to the generosity of one of Michelle’s law partners, we gained the opportunity for a free stay in Sedona, Arizona, which we turned into a trip around the Four Corners region of Colorado, Utah, Arizona and New Mexico. While both had been to various states west of the Rocky Mountains, neither Steve nor Michelle had ever been to the places we realized we could reach as we traveled to and from northern Arizona. Some were amazing, some sort of terrifying, and none had the right combination of kitchen and foodstuffs to convince us to cook. We did have some memorable meals, and will definitely remember what we found along our way.

We began our trip in Denver, picking up a rented Mercedes SUV and a cooler full of gourmet cheeses, meats and snacks for our long road trip through some severely underpopulated areas. After crossing the Rockies and the Continental Divide, we spent the night in Grand Junction, Colorado, finding a pleasant restaurant where we had expected nothing but kitschy versions of “cowboy steak” and “campfire beans.” The next morning, we awoke and set off for Bryce Canyon in southern Utah. It would prove to be the most beautiful part of our stay. To get there, however, Michelle would have to endure the most terrifying drive of her life—thanks once again to Steve and his trusty Michelin road atlas.

The day began on beautiful, wide Interstate 70, a testament to American highway design. Then we turned south on Utah 24, gently touring our way through impressive mesas and rocky towers. 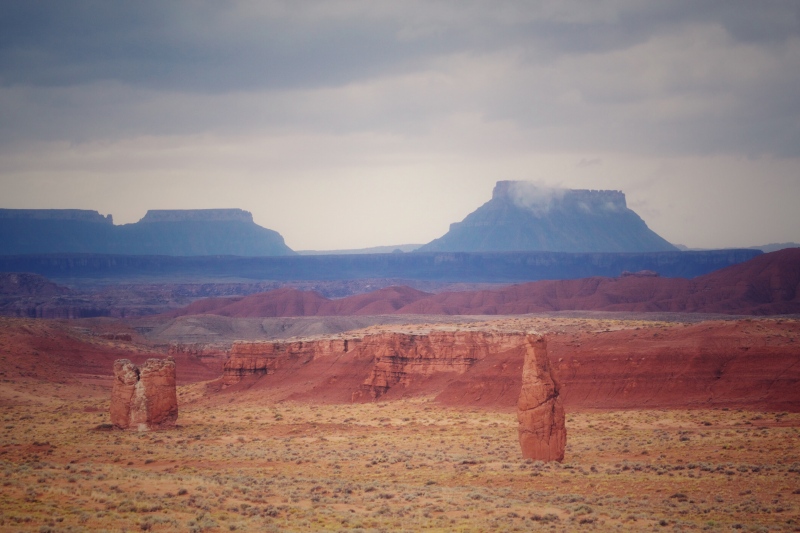 We stopped for a good while in Capitol Reef National Park, getting our first up-close look at petroglyphs and enjoying some easy, nicely graded paths overlooking some fairly impressive heights. 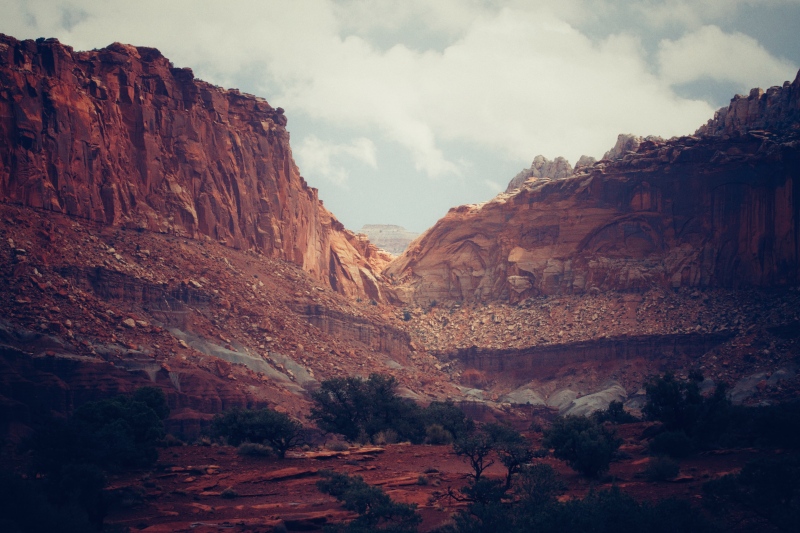 Have we mentioned before that Michelle is afraid of heights? Really, truly, character-transformingly terrified of heights? And that most of her trip was to be spent at altitudes of over 5,000 feet above sea level, with mountains and ridges rising many times above that?

Perhaps, in an augmented-reality future, Michelin road maps (which are very handy in places where wireless service is spotty or unavailable) will feature three-dimensional topographic indications of the many routes they show. That feature might have helped Steve realize what would happen when he directed Michelle down Utah Route 12. As he currently possesses no method of time travel, Steve made do with his print Michelin version, which only indicated a slightly longer trip promising views of both Capitol Reef and the Grand Staircase Escalante Monument. As it turned out, those views were available at the same time.

Tourism professionals in Utah describe Route 12 as a “delicate dance … [traversing] a spine of otherworldly rock formations with sheer drops.” Michelle, who was driving (and only later told Steve she feared passing out from being unable to breathe) just kept calling it “the place where it was ON BOTH SIDES!!!” While Steve marveled at the sensation of driving along a knife-edge ridge overlooking two different desert environments, Michelle spent the trip hunched over the steering wheel, staring fixedly ahead and quietly alternating between shaky declarations of self-confidence and whimpering confessions that it was the worst thing she’d ever been through. 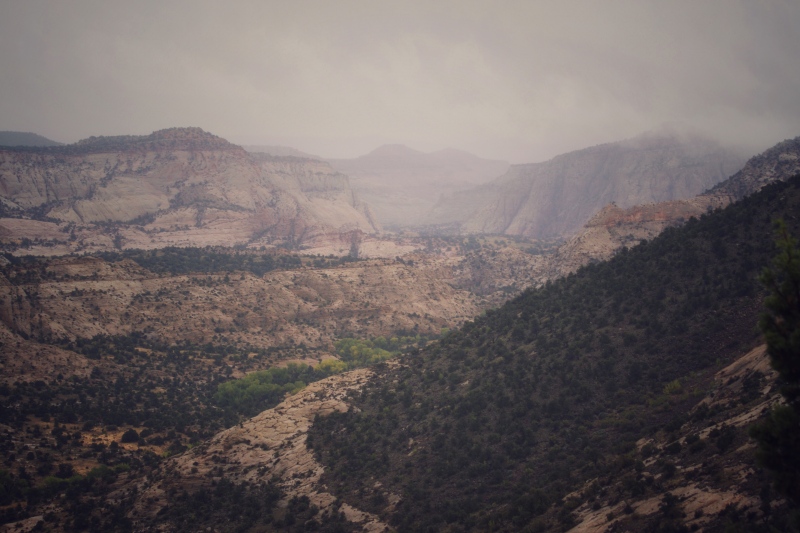 Utah Route 12: The view was about the same from both sides of the road. Precipitous drops. No guard rails. The horror…

Despite Michelle’s conviction that the road was about to collapse, we somehow made it to Bryce Canyon and everywhere beyond, where heights no longer seemed to matter all that much (unless they did).

Bryce Canyon was a truly awesome experience, and not simply because of the phenomenal rock formations glowing in the sun. At over 8,500 feet in the air, it also let us experience a severe lightning and hailstorm up close and personal, complete with a dusting of snow for our sunrise photo shoot. 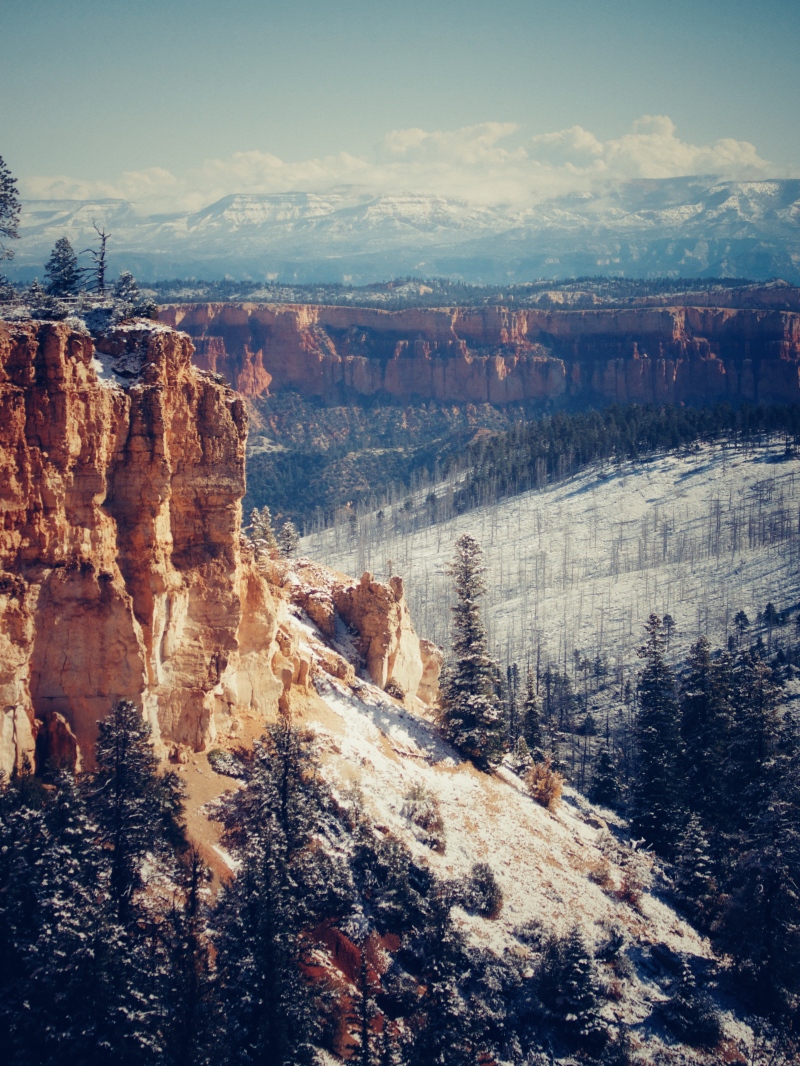 The next day found us at Zion National Park, where we marveled at the steep canyon descent (Michelle approved of the guard rails). We enjoyed the scenery and the animals, but groused about the crowds of Vegas day- and wealthy Tauck Tour-trippers rushing along the trails. 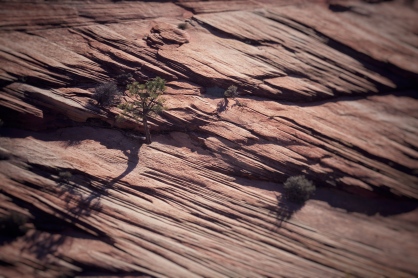 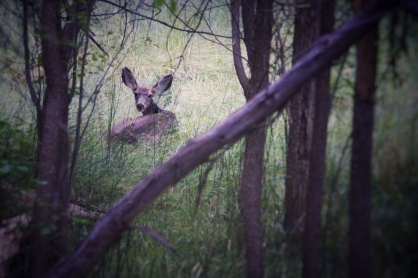 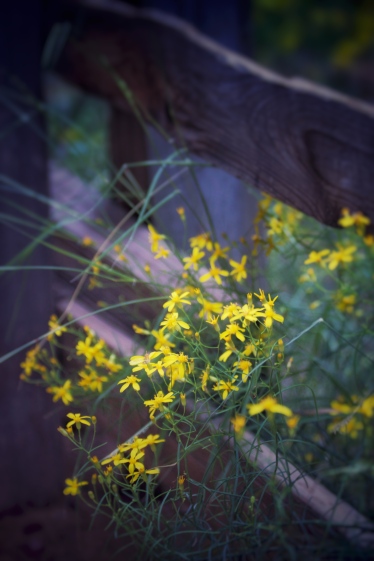 Morning was much better, but we soon left Zion for something truly spectacular—the Grand Canyon North Rim. We despair of describing the sensation of standing along the edge of something so vast, and our pictures (see more on Instagram) also cannot do it justice. No matter how many times we looked, or how many places we stopped along its course, the scope still took our breath away. 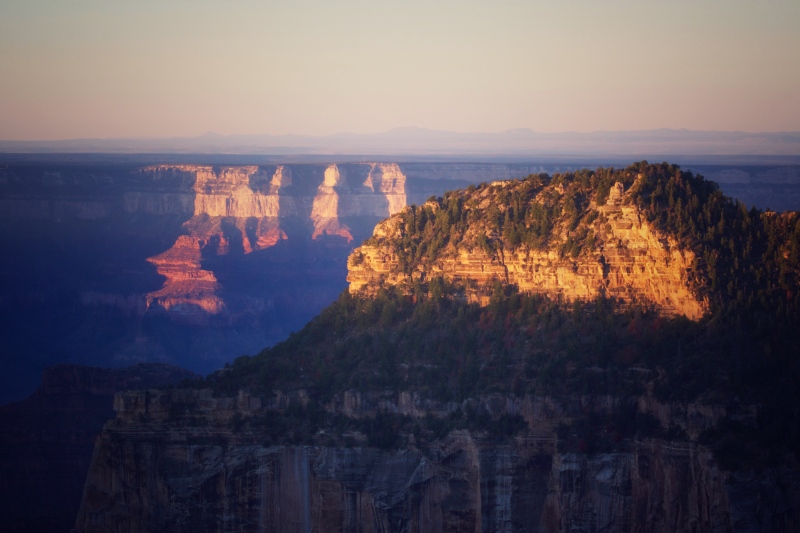 After staying the night we headed for Sedona, continuing our adventure into the West. We spent about a week in the crazy New Age spiritual (crystals! fortune tellers! aura photos! vortexes!) Arizona town—crawling along desert canyons, taking pictures of red rocks and hummingbirds, and wishing we could find something decent to cook. 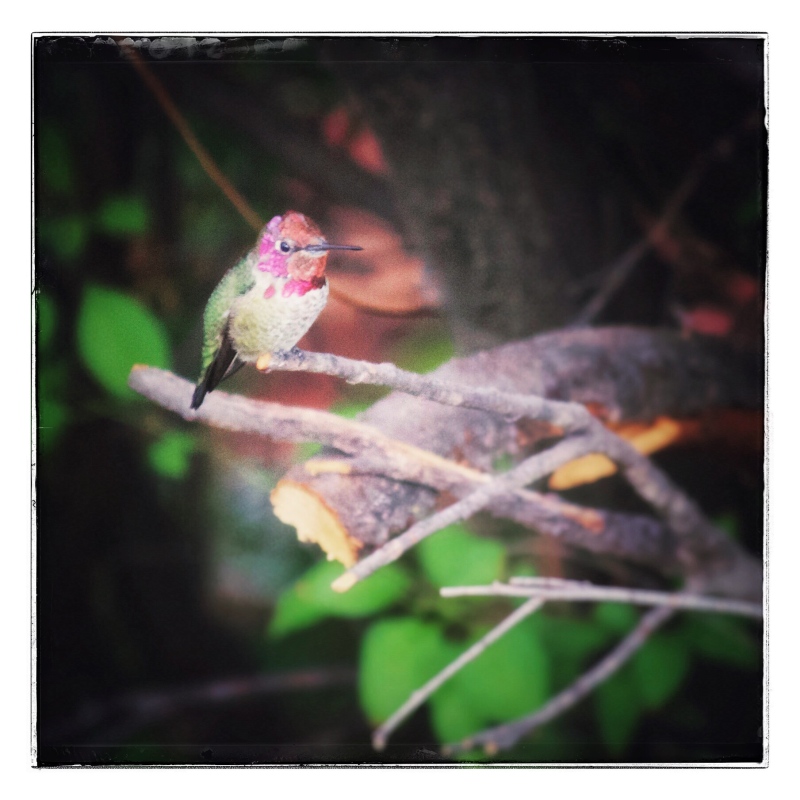 While we had a nice kitchen at our disposal, the Sedona Whole Foods was a disgrace to a sometimes disgraceful corporation, lacking either appetizing vegetables or proteins but overcompensating with a very unpleasant odor. We ended up eating at several restaurants, though our best meals came from multiple trips to Mariposa, a place just down the road from our lovely (and free!) desert location. We also enjoyed a meal at Elote Cafe, where we bought a cookbook and found the inspiration for our pepita cake. 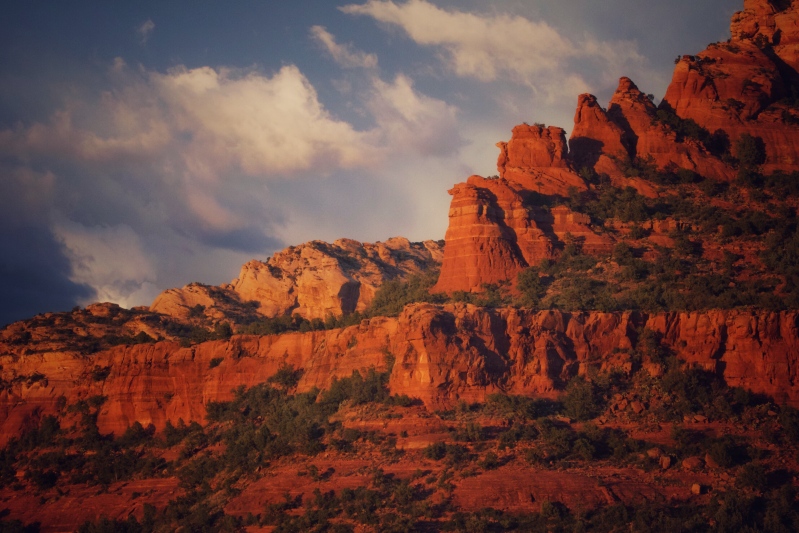 When our time in Sedona was over, we headed for Santa Fe, stopping by the Petrified Forest and Painted Desert for more pictures. Santa Fe itself seemed to be an upscale, adobe-oriented version of the American West, fortunately one with an excellent tapas place where we enjoyed two wonderful meals. After a couple of days in Santa Fe, another several-hour drive returned us to Denver, where we spent a night at the airport before coming back to Kentucky.

This post has been a rather long journey to arrive at a delicious cake, but we must remind you that the American West is very, very big. As we said before, returning home almost immediately put us in the mood for home-cooked meals, so we spent several evenings enjoying burgers, sausages with lentils and other simple stuff that fancy restaurants might sneer at. This cake, however, they would not. Michelle took Elote Cafe’s cake and dolled it up with a bittersweet glaze, candied pepitas plus a bit of chili flakes and salt. The sweet, light cake greatly benefited from the bitter, salty and spicy glaze, and gave us pleasant memories of our recent trip. Much, much more pleasant than some memories of Utah Route 12.

Preheat over to 350° F, with a rack in the middle. Butter and flour a 9″ springform pan.

Cream butter and sugars in a stand mixture until light and fluffy. Add eggs, one at a time, until fully incorporated. Scrape down sides of bowl.

Pour into prepared pan and level. Bake for about an hour, until a toothpick comes out clean. Cool on a wire rack.

Heat cream and espresso powder in a small saucepan, stirring. When scalded, remove from heat and add chocolate. Whisk until the mixture is smooth. Whisk in butter.

Set mixture aside to cool at room temperature, whisking occasionally. Or, you can hasten the process by refrigerating.

Place some wax paper under the cooling rack with the cake on it. When glaze is thick but still pourable, pour over top of cake. Use an icing knife to smooth the top and sides.

Decorate the top of the cake with sugared whole pepitas (we added some chipotle flakes and kosher salt to ours) and/or ground toasted pepitas.