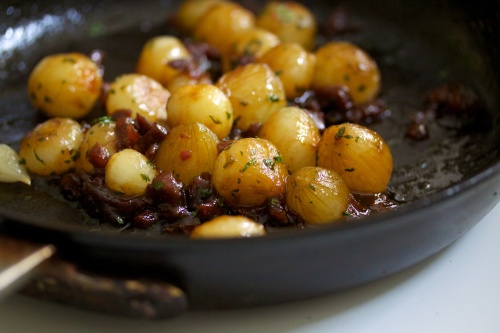 One of Michelle’s recent rummagings of antique store cookbook sections resulted in a copy of Roy Andries de Groot’s 1966 Feasts For All Seasons.  De Groot’s books were a big influence on many of the 1970s and 1980s California chefs—particularly his Auberge of the Flowering Hearth (1973), which describes a year of seasonal cooking at a small inn in the French Alps.  De Groot’s wealthy, blue-blooded, European perspective can sometimes be a bit annoying, but there’s much that is incredibly modern in his descriptions of seasonal dining.  In Feasts for All Seasons, he asks:  “What are the best foods in season at various times of the year?”  And he aptly commented:  “No amount of cooking skill in the kitchen can produce a fine meal on the table, unless it is preceded by selective skill in the market.”

Not long ago we chose a lovely box of tiny sweet onions at one of our farm markets. 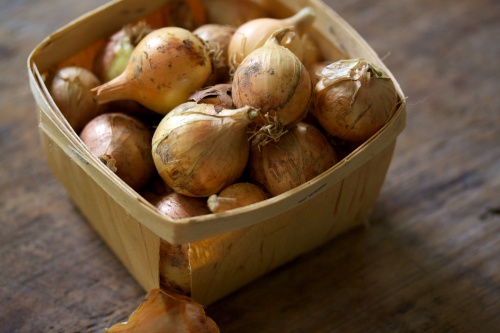 We looked to de Groot for guidance.  And, in the old cookbook, we found a timeless side dish that we look forward to making again and again.

Place olive oil in sauté pan and heat up over medium heat.  Add onions, stirring, and cook until they are lightly browned.

Add Marsala and vinegar.  Reduce heat and add maple syrup, chopped apricots, red pepper flakes and salt.  Bring to a boil, then turn heat down.  Cover.  Let onions cook until quite soft, about 30-45 minutes.  Check periodically.  If getting too dry, splash in some chicken or vegetable broth.

Uncover and boil hard to reduce and thicken sauce.  Sprinkle with chopped parsley.

Turn onions out in to a serving dish, scraping out contents of pan.  As de Groot says, “[t]hey will have an attractive sweet-sour flavor.”